Rival JD(U) Factions To Meet Today, Split On The Cards 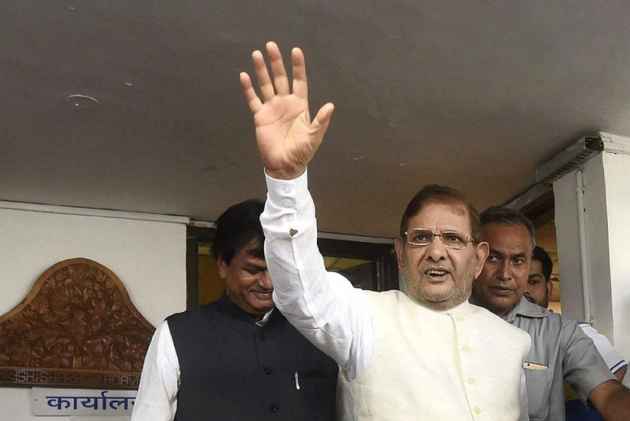 Rival JD(U) factions headed by Nitish Kumar and Sharad Yadav have called parallel meetings today indicating that the party may be heading for a split after the disintegration of the Grand Alliance in Bihar.

A national executive committee meeting of the JD(U) has been called at its national president and Chief Minister Nitish Kumar's official residence here where the party is expected to formally accept the invitation to join the BJP-led NDA.

Loyalists of Sharad Yadav, who has opposed joining hands with the BJP, are also organising a programme, 'Jan Adalat' at S K Memorial hall.

The two meetings make it clear that battle lines within the JD(U) are drawn and the party may be heading for a vertical split. JD(U) principal secretary general K C Tyagi has, however, maintained that there is no split and that Yadav "has left voluntarily".

Tyagi told PTI today that the national executive meeting at the One Anne Marg residence of the chief minister is the party's official programme.

The party was originally set to hold its national executive in Delhi on July 23-24 last. But the date was changed to August 19 and the venue was shifted to Patna.

Asked about the agenda of the national executive meeting, Tyagi said it would put its seal of approval on the party's Bihar unit decision to break away from the Grand Alliance and form a government with BJP "in the interests of the state".

Kumar had made it clear that he had walked out of the Grand Alliance of the JD(U), RJD and Congress as per the wish of the party's Bihar unit.

The JD(U) is registered with the Election Commission as a regional party of Bihar, he had said.

"The national executive would also give its consent to the invitation of BJP President Amit Shah to the JD(U) to join the NDA fold," Tyagi said.

Shah had extended the invitation when Kumar had met him in Delhi recently.

Some other amendments in the party constitution would also be taken up, he said, but refused to divulge details.

Asked about "Jan Adalat" which would also be attended by Yadav, Tyagi said it is not an official programme of the party.

Bihar JD(U) chief spokesman Sanjay Singh said "we have nothing to do with the Jan Adalat programme."

A poster war has erupted here with the rival groups publicising their respective programmes.

Sharpening the attack on Nitish Kumar, Ansari asserted in Delhi that those opposed to the Bihar chief minister represented the "real" JD(U), and added "Nitish represents BJP Janata Dal".

He refused to acknowledge a "split" in the party and said there is "sharp resentment" among JD(U) workers on the removal of Sharad Yadav as the leader of party MPs in the Rajya Sabha for questioning Nitish Kumar's decision to form an alliance with the BJP.

Ansari said all the leaders of the party including Sharad Yadav would discuss the goings-on in the JD(U) at the convention here tomorrow and later visit the flood affected areas of Bihar.

Ansari told PTI that their meeting is being held to honour people's mandate given to Mahagatbandhan in 2015. He said he along with Sharad Yadav would arrive in Patna for the programme tomorrow morning.

"I and Sharadjee had thought of attending the national executive meeting and give our opinion against dumping of the Grand Alliance and joining hands with BJP.

"But they (Nitish Kumar group) could not wait even till August 19 (tomorrow) and suspended me and removed Sharad jee from the post of parliamentary party chief, which is undemocratic," Ansari said.

Another Sharad Yadav loyalist Vijay Verma, who was among 21 JD(U) leaders suspended recently, said, "Our programme is to strengthen secular forces in the country."

The rebel JD(U) programme follows a mega meeting of anti-BJP parties held yesterday in the national capital, which they said, was to save the "composite culture" of the country.

The party's former national general secretary Arun Kumar Srivastava, who was expelled after the JD(U) legislator in Gujarat voted against the NDA candidate in the recent vice- presidential polls, said in Delhi that the rebels could approach the Election Commission to claim the party's name and symbol in case of a split.

"Although I do not think Nitish will claim the party symbol because he has no love for the party or its symbol, but we will definitely approach the EC in case there is need," he said.

Srivastava also claimed that all the state party units, except those in Bihar and Jharkhand, were supporting Sharad Yadav and those opposed to Nitish Kumar.

"We have received support letters from the presidents of 14 state units who are opposed to the JD(U) alliance with BJP. They expressed their willingness to attend the Patna convention but may not be able to do so since it is being held at short notice," he said.

He accused Nitish Kumar of not honouring the "democratic norms" in removing party leaders without seeking explanation.

"I was not served any notice or asked for any explanation. The same happened with Sharad Yadav and Ali Anwar and 21 other leaders who were removed in Bihar," he claimed.

Srivastava also attacked Tyagi for siding with Kumar and his decision to go with the BJP, saying he was doing so for the "lust of power".