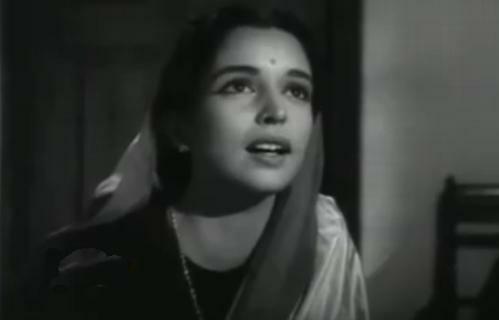 From a still in Anuradha
File Photo

Leela Naidu, a reluctant actress in films, died on Tuesday, after a prolonged illness. She was 69 years old.

Daughter of famous nuclear physicist Ramaiah Naidu and a French mother, Leela Naidu was crowned Miss India in 1954. Vogue named her as one of the five most beautiful women in the world.

Naidu made her debut in Hrishikesh Mukherjee's Anuradha opposite Balraj Sahni in 1960. The film didn't do well at the box office, but got her high acclaim and the National Award for best film.

The film's music score was given by noted Sitarist Ravi Shankar who compared her "as an actress at par with Ava Gardner and Sophia Loren."

In 1962, she was seen in Ummeed. Her role in Yeh Raaste Hain Pyar Ke (1963), made on the infamous Nanavati murder case, with actor Sunil Dutt, got her nationwide fame and popularity.

In the same year, she starred in the first Merchant Ivory Production The Householder, which was directed by James Ivory.

The film was shot in Daryaganj in Delhi in a real barsati not in a studio or sets by Subrata Mitra, Satyajit Ray's director of photography.

The film got her wide recognition. Satyajit Ray was bowled over and called her brilliant. He planned an English film, The Journey, with her and Marlon Brando in the lead roles, but the film had to be shelved.

After a guest appearance in The Guru in 1969, Leela Naidu left films to get married to Bikki Oberoi, the heir to the Oberoi Hotels chain, with whom she had twin daughters.

She later divorced Oberoi and married poet Dom Moraes, and stayed with him in Hong Kong for about ten years. The couple were later separated.

After many years, she made a reappearance in Shyam Benegal's Trikaal in 1985 and last acted in Pradeep Kishen's 1992 film,  Electric Moon, which also starred Arundhati Roy.

She lost the custody battle of her twin daughters to Bikki Oberoi and became philosopher J. Krishnamurti's disciple. But she would always be remembered for her elegance. Her beauty, Dom Moraes once said, was "a vocation".