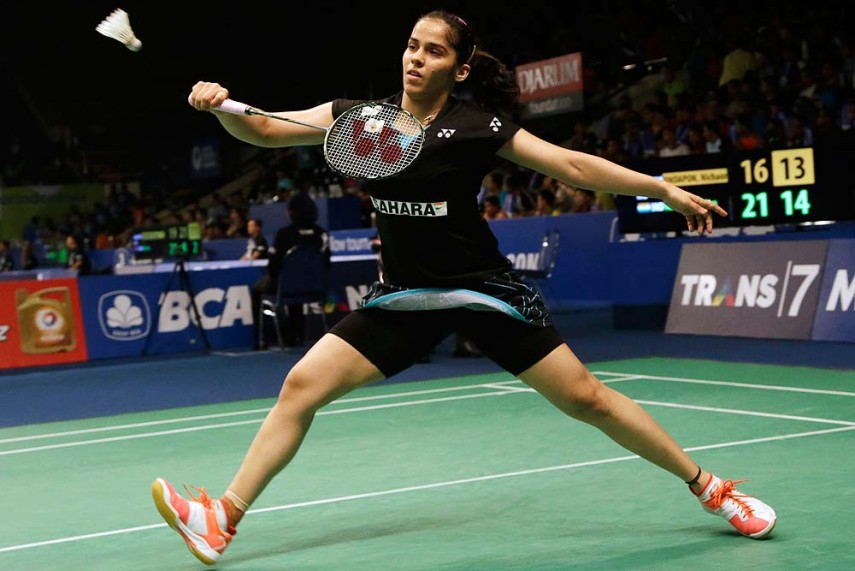 Women shuttlers Saina Nehwal and P V Sindhu were the only bright spots in yet another disappointing day at the Rio Olympics as India's campaign continued to be haunted by setbacks in archery, boxing and hockey on the fifth day of competitions here today.

London Games bronze winner Saina Nehwal and two-time World Championship bronze medallist P V Sindhu made a resounding start to their badminton campaign but it was the end of roads for Indian archers Deepika Kumari and L Bombayla Devi and boxer Shiva Thapa.

Former World No. 1 Saina staved off a spirited challenge from World No. 73 Brazilian Vicente Lohaynny 21-17 21-17 in a women's singles match which lasted 39 minutes at the Riocentro here.

The World Championship silver medallist Indian will next take on World No. 61 Maria Ulitina of Ukraine in a Group G match on August 14.

The 26-year-old from Hyderabad took 20 minutes to pocket the opening game before sealing the issue by wrapping up the second game in 19 minutes.

Ninth seed Sindhu, a two-time World Championship bronze medal winner, too had a good day in office as she spanked World No. 64 Laura Sarosi of Hungary 21-8 21-9 in a Group M women's singles match that lasted for 27 minutes.

She will play against Glasgow Commonwealth Games champion Li Michelle of Canada on August 14 to complete the preliminary group engagements.

Sindhu did not break any sweat against her World No. 64 rival as she took 13 and 14 minutes to wrap up the first and second games.

"I was not under any pressure. I was very excited about my first match. Proved to be an easy match. But I didn't take it easily. I was trying out my strokes. The crowd really supported me. Hope to perform in the same way on 14th (her next match)," Sindhu said.

On her next opponent Michelle Wi, Sindhu said: "She is slightly tough. We have two more days. Will get well prepared for that. One more match to go. Taking it match by match."

Jwala Gutta and Ashwini Ponnappa, however, lost their women's doubles league opener by losing 15-21 10-21 to the World No.1 Japanese pair of Ayaka Takahashi and Misaki Matsumoto in Group A.

Men's doubles duo of Manu Attri and B Sumeeth Reddy lost 18-21 13-21 to World No.2 Indonesian duo of Mohammad Ahsan and Hendra Setiawan to make it a mixed opening day in badminton.

There were more setbacks on day 6 of competitions in archery, boxing and men's hockey to dampen the Indian spirits.

Young boxer Shiva Thapa (56kg) bowed out of the Olympic Games after being out-punched by fourth-seeded Cuban Robeisy Ramirez in the opening round here today.

The 22-year-old, competing in his second Olympics, lost 0-3 in a one-sided contest in which he also ended up sustaining a cut above his left eye.

The Indian boxing challenge is now limited to Vikas Krishan (75kg) and Manoj Kumar (64kg) and both of whom have advanced to the pre-quarterfinals.

India's campaign in women's archery came to an abrupt end with the elimination of Deepika Kumari and L Bombayla Devi at the pre-quarter final stage of the eliminations while the men's hockey team missed chances galore before losing to The Netherlands 1-2 in Group B.

Both Deepika and Bombayla Devi bowed out after being found wanting in pressure-cooker atmosphere.

Deepika, the young exponent from Jharkhand who was in her second Games, and third-time Olympian Bombayla were knocked out without putting up much of a fight in their pre-quarterfinal elimination matches.

Deepika was up against World No.2 Tan Ya-Ting of Chinese Taipei, and was blanked 0-6 -- losing in straight sets -- while Bombayla lost 2-6 to World No.18 Alejandra Valencia of Mexico, after winning the second set.

Both the archers were guilty of letting their nerves get the better of them.

Deepika was the first to take aim today and failed to raise her game when it mattered the most, losing 27-28, 26-29, 27-30 in a lop-sided contest, during which she managed to hit the bull's eye only once.

While Deepika seemed out of sorts in the high-pressure match, Ya-Ting was a picture of composure, calmly striking 6 perfect 10s -- three of them back-to-back in the third set.

"I'm really sad. I feel very sorry to have let the nation down. I've nothing to say. Losing 0-6 is bad," Deepika said.

After losing the third set narrowly, the Indian just could not gather herself, striking a 6 off the first arrow in the fourth set, which ultimately proved to be her undoing.

The slender hopes in archery now rests on the less fancied Atanu Das who is in the pre-quarters of the men's event and will be in action tomorrow.

In men's hockey, India wasted as many as five penalty corners seconds from the final hooter to go down 1-2 against reigning silver medallist Netherlands and slump to their second defeat in the pool.

But the match witnessed intense drama in the final seconds as India did not bow out without a fight against the world number two side.

A draw against Netherlands today would have sealed India's place in the quarterfinals. But they now will have to wait for the result of their last pool encounter against Canada tomorrow.

India are now placed third in Pool B with six points behind leaders Netherlands (10) and Germany (9). Argentina are placed fourth with four points.