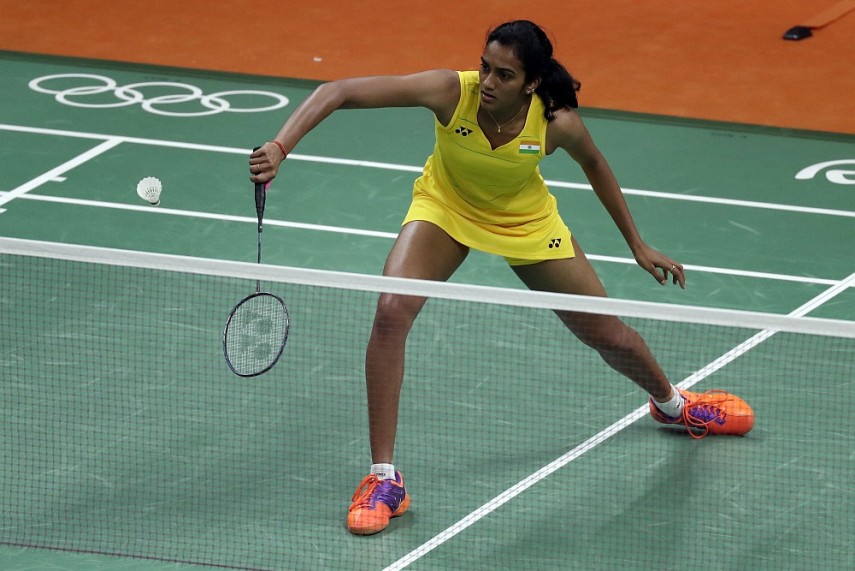 In one of the biggest upsets for the Indian Olympic contingent, medal hope Saina Nehwal crashed out of the Rio Games but Kidambi Srikanth and P V Sindhu kept India afloat by advancing to the pre-quarterfinals of the badminton event here today.

The London Olympics bronze medallist and world no. 5, Saina had inflammation on her right knee and lost 18-21 19-21 to World No. 61 Maria Ulitina of Ukraine in her second Group G match that lasted 39 minutes at the pavillion 4 Riocentre.

In Group M women's singles, Sindhu, however, managed to eke out a 19-21 21-15 21-17 win over Glasgow Commonwealth Games champion Li Michelle in a gruelling 72-minute match.

In men's singles, Srikanth, a former World No 3, defeated Sweden's Henri Hurskainen 21-6 21-18 in the second match of group H that lasted 34 minutes here to enter the knockout stage.

The 21-year-old Sindhu played a lot of drops at the backhand of Li but the Canada shuttler was up for it. After a tough fight, Sindhu managed a slender 11-10 lead at the break in the opening game. After the breather, the duo continued to fight for each point before a onrushing Li pushed the shuttle at the backcourt of Sindhu to pocket the first game.

The second game was no different as both the shuttler fought tooth and nail before Sindhu entered the break at 11-8. The Indian continued her good run and surged to a 18-13 lead and then reached the game point with a powerful smash. She eventually roared back to contest when Li found the net.

After lagging 1-3 in the decider, Sindhu turned the tables at 6-5. A couple of taps from Li going to the net meant Sindhu led 8-5. A deceptive net play and a judgement error by Li took Sindhu to 10-5, before the Indian entered the interval with a 11-7 lead after Li didn't have answer to her powerful smash.

After the change in ends, Sindhu committed a couple of unforced errors and Li too produced a down the line smash to narrow it down to 10-11.

Sindhu once again distanced herself from Li, reaching 16-11 after dominating the fast-paced rallies. With Li hitting wide and at the net, Sindhu reached 18-11. Li continued to fight and grabbed a few points before Sindhu managed to reach the match point at 20-16 after a deceptive tap at the nets.

Sindhu lost a point before smashing her way to the pre-quarterfinals.

Earlier, World No. 11 Indian Srikanth lifted some gloom from India's sagging badminton campaign as he avenged his 2014 Swiss Open loss to Henri.

Srikanth stamped his authority with his strokes and also pushed his rival to make mistakes.

In the opening game, Srikanth led 13-4 before moving to 17-5 with a towering cross court smash. The Indian had no problem in dealing with Henri and took just 13 minutes to wrap up the game.

Stung by the first game reversal, Henri raised his game and fought hard to move neck-and-neck from 8-8 to 11-11. Srikanth opened up a 15-12 lead but the left-handed shuttler kept breathing down the neck of the Indian.

In the end, it was two long shots from Henri which helped Srikanth to seal the issue in his favour and reach the pre-quarterfinals.

After winning Srikanth said:"I am really happy to hear that from him. I feel everyone is playing really well. At home people are maybe saying the top 12, the top 13 in the world have the same chance to win the medal as everyone else. It just depends on how well you play in a particular match."

"It went really well for me today, better than the last match for sure. I hope to continue to improve going into the quarterfinals. I think everything went well. My defence was good. I feel really good," he added.

Asked if Saina's defeat put more pressure on her, he replied:"I just want to focus on my game. I am very anxious to take all this pressure. It is my first Olympics and I am really trying to enjoy playing here."

Earlier former world no. 1 Saina, who had won the opening match against Brazil's Vicente Lohaynny on August 11, found her movement restricted due to her knee inflammation and saw Maria, who too had beaten Vicente in the opening match, reach the knockout stage from Group G.

Saina looked totally rusty as she squandered an initial 6-1 lead to allow Maria level the scores at 8-8 with the Indian burying the shuttle in the net.

The Ukraine player posed a lot of questions as Saina missed a few shots in the forecourt and back. The Indian, however, managed to enter the short break 11-9 in front with a drop which Maria could not return from the forecourt.

Maria caught up again at 13-13 when Saina hit long. She infact took a slender lead at 16-15 and 17-16 as Saina struggled with her movements.

With Saina continuing to be sluggish, Maria reached 19-17 and then reached game point with a cross court round-the-head smash which caught Saina napping.

The Indian then hit wide to allow Maria earn the bragging rights after clinching the opening game.

In the second game, Maria used her height to good use as she played some sharp and stiff smashes and half smashes which Saina failed to negotiate. The Indian mamaged to stay ahead with a slender 11-10 lead at the break.

But Maria dominated the pace of the rallies even as Saina seemed restricted in her movement as the Ukraine player led 14-13.

The script didn't change much after that as Maria managed to reach match point with a cross court smash and then entered the knock-out pre-quarter final round with a lucky net chord.