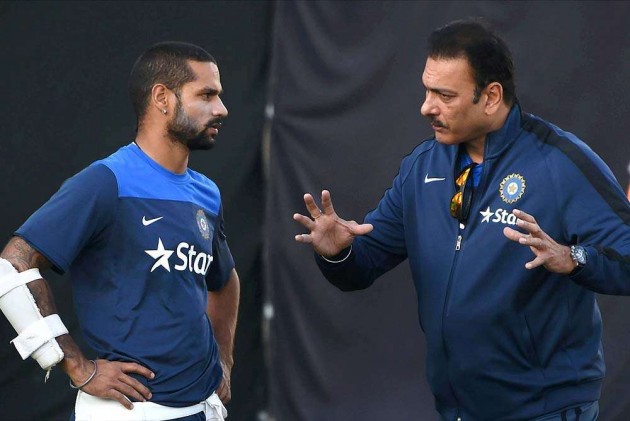 The new Indian Test captain Virat Kohli's aggressive attitude on the field has been strongly defended by Team Director Ravi Shastri, who says that it brings out the best in him.

In an exclusive interview to PTI here today, Shastri said the aggressive streak is working wonders for Kohli the batsman, who has already struck three hundreds in the ongoing Test series. He said the whole of Australia was admiring him for the way he is playing here.

Shastri also paid tribute to Mahendra Singh Dhoni, who took a shock retirement from Test cricket, saying that his "selfless act" of retiring from the five-day format at the right time should be given its due respect.

He also strongly rebutted reports that the growing closeness between him and Kohli resulted in Dhoni quitting Test cricket with immediate effect.

Q: Virat Kohli is the next captain. Do you think he needs to curb his aggressive mood a little bit?

A: What is wrong with that aggressive attitude? If he was only talking on the field and had scored only 5 runs in three Tests, I would have had a word with him. But he is 1 run short of 500 runs in this series. So obviously he is doing something right and it is working wonders for him and the team of course. He is an aggressive cricketer and he loves this attitude on the field and it brings out the best in him.

Sir Vivian Richards is in Melbourne and has praised his attitude. The whole of Australia is admiring him the way he is playing here, because for a long time they haven't seen anyone who plays such brand of cricket, against them, in their own country.

Of course Virat is only a young man, a young captain now, he will learn gradually with time as well. He will mature into an even better cricketer and that is only good for the team as a whole.

Q: Can you talk about the moment when MS Dhoni announced his retirement to the team? What was the reaction in the dressing room? How has the team reacted to it?

A: He took everyone by surprise. The match was over and he had finished his post-match commitments. And he came to the dressing room and said that his time in Test cricket was up. It was just a shock to us all. And the way he said it, it was obvious that it was a well thought-out decision. He didn't even inform his family but told his team-mates first. He was honest with us and honest with himself. His esteem in my eyes has just shot up by 20-25 notches.

This news was a bolt from the blue for us. He knew what words to say and he was honest about it. Dhoni is an all-time Indian legend, a cricket great. And this team sees him like one and not only for what he has done. He hasn't chased statistics or numbers or fanfare farewell. He was honest with himself and they respect him for it. This is a young team and an example has been set in front of them and it's a great learning for them.

Q: You have seen Dhoni from the commentary box. You have seen him as team-director. How do you rate him as a Test captain, after 8-0 in 2011-12 and this calendar year of overseas Test cricket?

A: It has been a hard job for him. In overseas Test cricket it's all about taking those 20 wickets. Recently they have been coming close but were unable to win. They should have won in South Africa and also in New Zealand. Here in Australia too they have competed well in all three matches and could have won any of them. It's a young side which is still learning.

But knowing Dhoni, he would have loved to win those matches but unfortunately at this juncture he felt his time in Test cricket had come to an end. He felt he wouldn't be doing justice to the team if he kept playing. He saw that the team had Virat Kohli fit and ready to lead and he saw there was Wriddhiman Saha to take over from him behind the stumps. He saw the future was in safe hands.

Dhoni gave his everything for Indian cricket, irrespective of the format. I am sure he will keep playing limited-overs formats for a couple more years like a king and some opposition team will get hurt.

Q: In December 2012, in Nagpur, after losing the Test series (2-1) to England at home, Dhoni had hinted about retiring from one format in late 2013. But he has waited a whole year to do so. What do you think is the reason behind that?

A: I believe it is a well thought-out move. A lot of hard work has been put into this team over the last one year and he felt that it was time to hand over the charge to a fresh young leader. He has made sure that there will be no speculation over who will be captain afterwards or who will be wicket keeper after he is gone. All these questions are answered. Dhoni isn't leaving without reason, it's not ill-timed. It's a long process and everything about it has been a selfless motive from Dhoni.

For playing 25 years for the country Sachin Tendulkar was an exception and rightly so. But in the past there have been so many players who play for stats or want fanfare farewells, they just keep on playing. But there are very few who don't need that. Dhoni belongs to the 'I don't need it' club. And there are people speculating about his motives and judging him that he abandoned a sinking ship and all that nonsense. Forget playing, have these people even watched 5 percent of the cricket Dhoni has played?

Q: Moving on, you have been with the team for six months now. What exactly is your role as Team Director?

A: My role is to oversee everything that goes on with the Indian team. I make sure that everyone and everything is functioning to the best of their abilities for the betterment of the players, so that the Indian team can deliver results in all formats of the game. As and when it is necessary, I also give my two cents in the dressing room.

Q: Will you be willing to take on a full-time role with the team after Duncan Fletcher's time ends post the 2015 ODI World Cup?

A: As the Director of the Indian team, my job is to put forward to the BCCI, what I think serves best for this team. I have to make them aware of all the functionalities available to the players, and what they need more to be able to keep on performing consistently at this level and to give Indian cricket the desired results. That is what I will tell the BCCI after the World Cup.

After that whatever the Board deems is in the best interest of the Indian team, they will take the final decision and it will be acceptable to me as well. But at this stage I don't even want to think about all those things because it is a long way off. We have a very important three months of international cricket ahead of us, then we have the IPL and only then some international assignment will come up. So there is plenty of time to mull over all of this.

Q: In the last six months, different Indian players have praised your inputs in the dressing room/practice sessions. What have you said to them?

A: My only job has been to give a favourable environment to the Indian players in the dressing room. This is what we are all striving to do, whether it is Duncan Fletcher or R Sridhar or B Arun or Sanjay Bangar. Our effort is to give them a proper atmosphere where they can grow as players. And we are speaking the language of cricket to them.

Experience in cricket is something that can neither be bought nor sold, it is not a commodity. You can only gain experience by playing cricket. So we want them to forget everything and compete, play to win. Go out there and take the opposition head on. When I first joined I felt the enjoyment aspect had gone out of their game, so my personal aim has been to bring back that element into their game whether they are playing at home or at the MCG or at the SCG.

Q: What went wrong that the players weren't enjoying their game?

A: I can't really point it out and I don't have the pulse of that exact moment. But I felt it. I told the players that it is not a 9-to-6 job that they are doing on the field, sitting in front of computers. They are on the field to play cricket, to represent their country. They should take pride in the way they are playing and get on with the game.

These guys can play bloody good cricket and they just needed the smallest of change in outlook to be able to do that. They are playing for one of the best countries in world cricket, millions of fans watch them, adore them when they play well and criticise when they play badly. That passion has to reflect in their cricket as well, and I must say here that it has. This has been a very competitive series.

Q: What has impressed you most in this series? India is still trailing 2-0 and have conceded the Border-Gavaskar Trophy.

A: People back home do not realise how well this young side has played in Australia, giving it back to the opposition on the field, and the Australian public is appreciating that. I am not one to make excuses and will not do so for the team either. The score-line is against us but they have played good aggressive cricket. This is what I like about this team, grabbing every opportunity to play for India. They have a mindset to not just turn up overseas and mark attendance in Test cricket but they want to compete and win Test matches. They have shown that with both batting and bowling.

We have primarily used only four pacers on this tour and they have looked to attack. The batsmen have been wonderful. Look at Murali Vijay and his solidity at the top order, or look at that partnership between Ajinkya Rahane and Virat Kohli. And the biggest point for me is that this is a very young team, still learning, and they all have at least 5-6 years of cricket left in them together as a group. They will develop into one of the most dangerous team in world cricket if they carry on playing with this attitude.

And I want to add here about some of the stuff that is written about the dressing room. Let me just say this Indian team doesn't care about such stories. And some of them are complete garbage, trash is the word. Shikhar Dhawan and Virat Kohli didn't even have an argument let alone what was speculated and said. We don't care about such things being written or said about the dressing room.