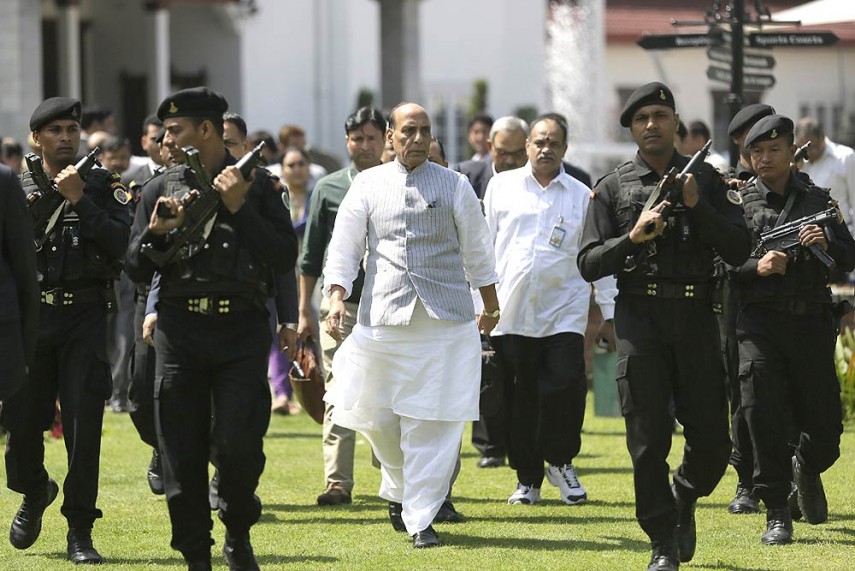 Describing India as a "university of tolerance", Home Minister Rajnath Singh today asserted that religious persecution will never be allowed in the country.

"Tolerance is essential for peaceful existence. People from all religions live peacefully in India and practise their religion without any fear of discrimination. That is why India is a university of tolerance," Singh said at a meeting of Christian leaders organised by India Christian Council here.

Singh said Christianity came to India almost 2,000 years ago and Kerala is home to St Thomas church which is one of the world's oldest churches. He said India cannot forget the contribution of Christians -- from Saint Thomas to Mother Teresa -- who tried to eradicate evils from our society.

"There were incidents of attacks on churches in Delhi which came up in the run up to elections (to Delhi Assembly). But I would like to say that religious persecution will never be allowed in India whether it is before or after election," he said.

Targeting Pakistan, Singh said while India chose to be a secular country, Pakistan declared itself a theocratic state and was now pursuing terrorism as state policy

"In 1947, India was divided on the basis of religion and despite that, it chose to be a secular state.

"The nation (Pakistan) separated from it declared itself a theocratic state. That country uses terrorism as a state policy."

It is very unfortunate that some countries make terrorism a state policy. There can be differences between people that can be resolved through dialogue but not by taking up guns, he said

Singh said a terrorist does not belong to any cast, creed on religion.

"Not only India, but many countries in the world have been affected by terrorism. A terrorist is a terrorist who does not belong to any caste, creed or religion. Although, some people link terrorism with religion but it is wrong," he said.

The Home Minister said in India, people from all religions get respect and it is the only country where all sects of Islam are found.

"All important religions find place in India," he said.

The meeting was attended by BJP MP and National Chairman of the All India Confederation of SC/ST Organisations Udit Raj and Joseph D'Souza, Moderator Bishop, Good Shepherd Church, India and President of All Indian Christian Council.

D'Souza asked the Christian community to stand with the government and support it in the fight against terrorism.

The Council requested Singh to send a circular to state governments and police to ensure protection of Christians and places of their worships.

Pointing to India's liberal ethos, the Home Minister said, "We do not impose our point of view on others. Such is the limit of tolerance in India. God is one, his definitions can be multiple."

Singh said from Saint Thomas, Bhagini Nivedita, Bhikaiji Cama to Mother Teresa, all got respect in India. "If India were not a university of tolerance, these people would not have got so much respect," he said.

The Home Minister said there are many challenges in India which can be resolved with the support of all. "Education is one example. Indian constitution allows religion minorities to run its own educational institutions," he said.

"People not only from India but all over the world are part of one family. 'Vasudhaiva Kutumbakam' is the term that India gave to the world." he said.