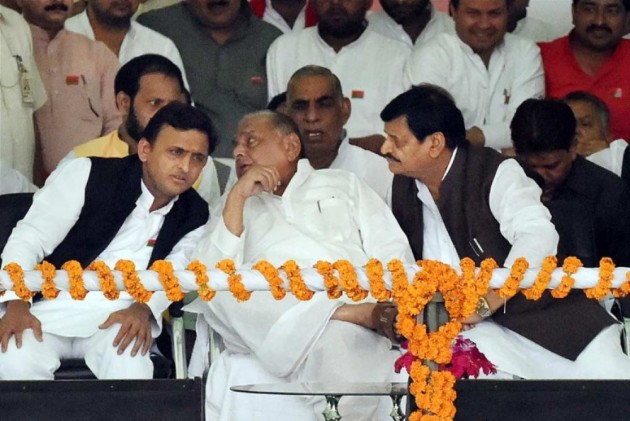 As the power tussle between Uttar Pradesh Chief Minister Akhilesh Yadav and his uncle Shivpal Yadav played out in open during the silver jubilee celebrations of the Samajwadi Party, Akhilesh Yadav on Saturday said that he was ready for any test and cautioned against "damage" to the party.

"I will not reply to certain things. Ram Manohar Lohia ji used to say he would be heard but only after death. I want to say that people will hear but only after everything is damaged," Akhilesh said while addressing an event.

His remarks came after Shivpal Yadav took a swipe at his nephew, saying some people inherit power without doing anything while others get nothing despite making sacrifices.

Akhilesh said, "If you want to take my test, I am ready for any thing. Our target is to defeat BJP and BSP in 2017 elections. This UP election will decide future of the country," he said.

"The party (BJP) which got over 70 (out of 80) seats in Lok Sabha polls did nothing for the state except giving model villages scheme. BJP created differences in the society by Muzaffarnagar and Kairana incidents. SP will return in UP and will not let such forces to rise," he added.

The SP has been battling a family feud between Akhilesh and Shivpal for the past few months. While Mulayam has been insisting that all is well in the party, both Shivpal and Akhilesh have been making statements exposing the rift in the party.

In a bid to portray a united front ahead of the 2017 state Assembly elections, the feuding first family had come together on Thursday to flag off Chief Minister Akhilesh Yadav's 'rath yatra' in Lucknow . Party patriarch Mulayam Singh Yadav and Shivpal, with whom the Chief Minister was locked in a bitter power struggle, had extended him "best wishes".

Pointing at Gayatri Prasad Prajapati, who was sacked by him earlier, Akhilesh said without any reference, "Prajapati has given me sword (at the event). You gave me sword and don't want to use it."

Earlier, when the event started, Akhilesh and Shivpal were given swords, which they accepted smilingly.

Highlighting works of his government, the UP CM said that besides starting metro, construction of roads and expressway, pension was given to 55 lakh women.

"In past 25 years, SP has come a long way but we have to think for next 25 years. Socialist ideology will take us forward. We were labeled as anti-English but we clarified that it is so when it is at the cost of 'Lokbhasha'," he said.

Talking about his laptop scheme, the most ambitious scheme of his government, Akhilesh claimed that no government in the country has done such a thing.

Speaking about the venue of the event - Janeshwar Mishra park, he said that 'Netaji' (Mulayam) had made Ram Manohar Lohia park, where people go to "take oxygen".

"We have made 400 acre Janeshwar Mishra park, which is biggest in the world. Despite so much crowd, which is disperesed in the entire park, the park is looking empty..," he said.