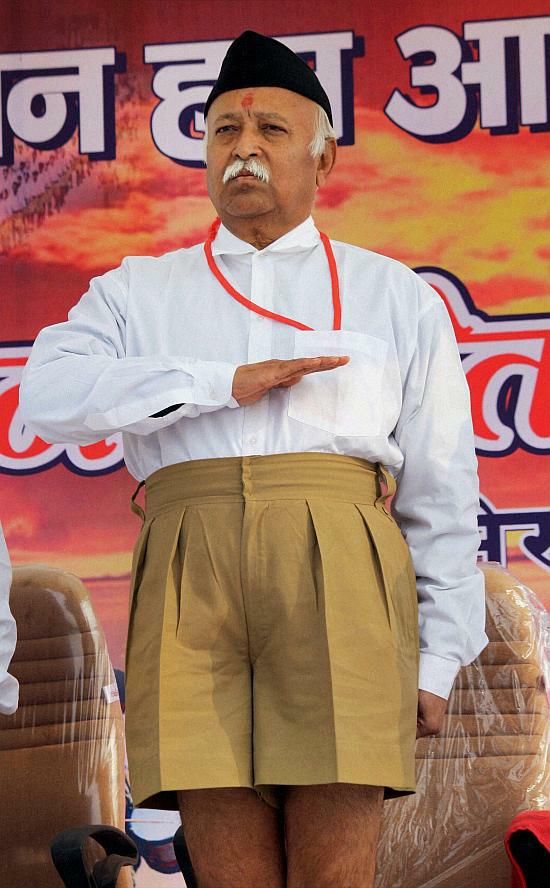 outlookindia.com
-0001-11-30T00:00:00+0553
RSS Chief Mohan Bhagwat created a flutter when he said rape is mainly prevalent in urban India due to western influence and that such crimes against women do not happen in rural areas of the country.

The remark that came against the backdrop of the Delhi gangrape incident was slammed by the Congress, CPI-M and women's bodies while the BJP and RSS defended it saying the comment should be taken in proper perspective.

Bhagwat claimed that the incidents of rape were the result of adoption of western culture in society as a whole and that erosion of traditional Indian values were more pronounced in urban areas.

"Crimes against women happening in urban India are shameful. It is a dangerous trend. But such crimes won't happen in Bharat or the rural areas of the country. You go to villages and forests of the country and there will be no such incidents of gangrape or sex crimes," he said at a meeting in Silchar in Assam recently.

"Where 'Bharat' becomes 'India' with the influence of western culture, these type of incidents happen. The actual Indian values and culture should be established at every stratum of society where women are treated as 'mother'," he added.

Demanding that the government take appropriate action to stop rape incidents, he said RSS will support any government initiative to change existing laws.

Karat said government statistics of atrocities on women and sexual assault showed that the maximum number of victims belong to the poor, dalit and tribal communities.

"We are all Indians. We are all citizens of India...Go to grassroots level and see what is the condition of the women there," he said.

"He has condemned the heinous crime of assaulting women, rape against women and he said it is an utterly wrong thing and that people who indulge in such things must be punished," he added.

"All that he(Bhagwat) said is that in Indian tradition we have great respect for women and we should learn to uphold this tradition. If one goes away from this tradition it will result in rise of crime against women," Madhav said.

BJP said the statement should be seen in the proper context as he was referring to India's culture, tradition and value system.

"The present controversy relating to certain comments of RSS chief Mohan Bhagwat is totally uncalled for and unnecessary. His comments are required to be seen and understood in entirety. He was referring to India's sanskar, tradition and value system where respect for women occupies a pride of place," BJP spokesperson Ravi Shankar Prasad said in New Delhi.

Backing Bhagwat, Prasad said the RSS chief had also underlined the need for meting out stringent sentences to the guilty.

"At the same time, he also demanded that strong punishment be given to those who are offenders in relation to crimes against women and that laws should be strengthened to even give capital punishment," Prasad said.

BJP maintained that empowerment of women, and giving them respect and security form the core of RSS ideology.

"There is extraordinary work and achievement made in various RSS-related organisations like Rashtriya Sevika Samiti, Vanvasi Kalyan Kendra, Vidya Bharti and other allied organisations which bear ample testimony to the same," Prasad said.

Slamming Bhagwat, Mamata Sharma said," He should go to the grassroot level and see what is the condition of the women there and then he should talk about cities."

AICC General Secretary Digvijaya Singh responded sharply to Bhagwat's comments, saying "this reflects RSS's mentality because there is no difference between India and Bharat."

Congress spokesperson Rashid Alvi said such statements are unfortunate and invoked Ramayana to put his point of view across. He said rape incidents occur in villages as well.

"Nobody has the right to draw 'Lakshman Rekha'...," he said.