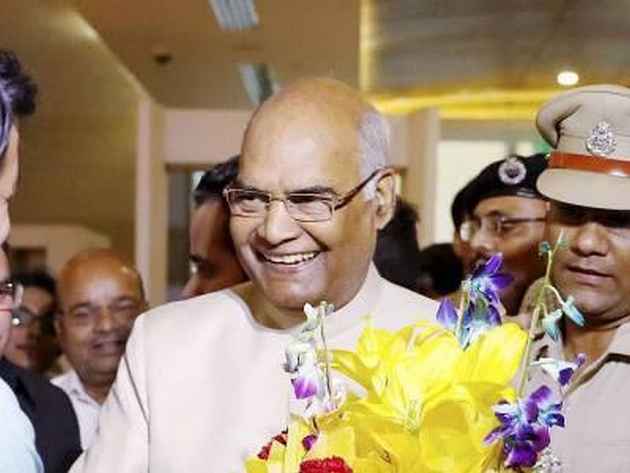 "Ever since I became governor, I don't belong to any political party," NDA Presidential candidate Ram Nath Kovind said after filing his nomination papers in the presence of Prime Minister Narendra Modi and a battery of NDA chief ministers and party leaders on Friday.

Kovind said he will strive to keep the President's post above the party. He also thanked everybody for their support.

BJP President Amit Shah and party veterans LK Advani and Murli Manohar Joshi were present during the filing of nominatons.

All chief ministers of BJP-ruled states and its allies except Manohar Parrikar of Goa and Mehbooba Mufti of Jammu and Kashmir were present.

Besides NDA constituents, which comprise over 48.6 per cent of votes in the electoral college that will elect the next president, regional parties such as the AIADMK, BJD, TRS and JD(U) have announced their support to the Dalit leader, making his win an almost foregone conclusion.

Kovind is guaranteed to get more than 61 per cent of votes, and the finally tally depends on how some still- undecided regional parties vote, BJP source said.

A group of opposition parties had yesterday announced that former Speaker Meira Kumar, also a Dalit leader, would be their joint candidate against Kovind.

The election is scheduled for July 17 and the counting of votes will take place on July 20.

The term of President Pranab Mukherjee ends on July 24.

Once elected, Kovind will be the second Dalit to occupy the highest constitutional office. The first was K R Narayanan, who was in the Rashtrapati Bhavan in 1997-2002.

A low-profile Dalit leader who held various organisational positions in the BJP, Kovind, 71, was made the Bihar Governor in 2015 after the NDA came to power in May 2014.

The name of the two-term Rajya Sabha member did not figure among the probables but his nomination by the BJP is now being seen as a "political masterstroke".

He enjoys a clean reputation and has steered clear of any controversy in his over 26-year-old political career. His Dalit background makes him a sound political choice for the saffron party working overtime to woo Dalits.