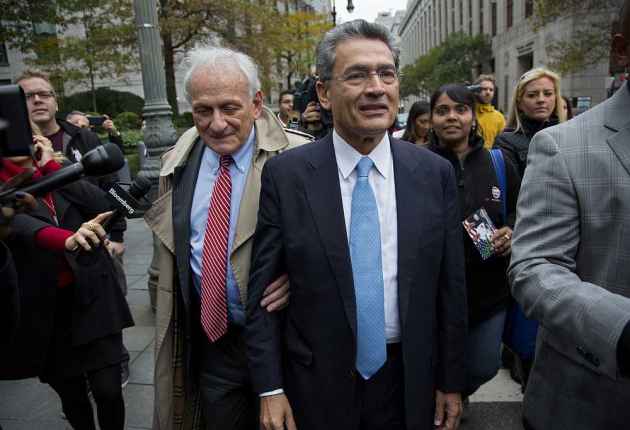 Fallen Wall Street tycoon Rajat Gupta was today sentenced to two years in prison and ordered to pay a USD five million fine by a US judge who termed Indian-American's insider trading crimes as "disgusting" and a "terrible breach of trust".

Gupta, 63 was also ordered by US District Judge Jed Rakoff to serve a year of supervised release after the end of his prison term.

The IIT and Harvard-educated former Goldman Sachs director would have to surrender to a designated prison on January 8, 2013. Rakoff denied Gupta's request to remain free on bail while he appeals his case.

A court could have taken about two years or more to rule on Gupta's appeal.

While the judge agreed to a request from Gupta's lawyers that he be assigned to New York's medium-security prison in Otisville, the final decision rests with the Federal Bureau of Prisons.

Dressed in a dark blue suit, Gupta looked tense and appeared to hold back tears as his sentencing proceedings began in Manhattan federal court here yesterday. He sat expressionless as Rakoff read the 15-page sentence at the end of the hearing which lasted over two and a half hours.

Gupta's sentencing comes exactly a year after he was charged with securities and conspiracy fraud, for which he had faced a maximum sentence of 25 years and marks a stunning fall from grace for the Indian-American who rose through the ranks to become one of the most prominent titans on Wall Street.

Rakoff, who on multiple occasions gave Gupta credit for his life of philanthropic works, said at the heart of Gupta's offences is his "egregious breach of trust."

'Good men who did bad things'

Rakoff said the evidence that Gupta passed illegal information about Goldman Sachs to now-jailed hedge fund founder Raj Rajaratnam was "not only overwhelming, it was disgusting in its implications... It was a terrible breach of trust."

Rakoff said the urgency and manner in which Gupta shared information about Warren Buffet's five billion dollar investment in Goldman Sachs with Rajaratnam "was the functional equivalent of stabbing Goldman in the back."

"In the eye of the law, Gupta's crime was to breach his fiduciary duty of confidentiality to Goldman Sachs; or to put it another way, Goldman Sachs, not the marketplace, was the victim of Gupta’s crimes as charged," the judge said.

Rakoff said he does not dispute Gupta's innumerable charitable works and his intentions to help out others selflessly but his personal history and characteristics "starkly contrast" with the nature and circumstances of his crimes.

Before Rakoff gave his judgement, Gupta made his first comments in court, reading from a prepared statement and expressing regret over letting his family and colleagues down.

Gupta's wife and four daughters sat right behind him in the spectators' gallery, holding each others' hands and often consoling each other as they wept through the hearing. Several of Gupta's close friends and other members of family were also present in the packed courtroom.

"The last 18 months have been the most challenging period of my life since I lost my parents as a teenager. I have lost my reputation that I have built over a lifetime. The verdict was devastating to my family, my friends and me," Gupta said.

At the end of the court's proceedings, Gupta smiled as he shook hands and hugged his team of defence lawyers.

Surrounded by his family, he said he had no comment on the sentence as he walked out of the courtroom.

The Rise and Fall

The Diwali of 2011 saw Gupta surrender himself before the FBI after charges of insider trading were filed against him.

The rise and fall of Gupta, who went from being one of the most successful India-born businessmen in the US to being called "deceptive and dishonest" after his conviction, has been the stuff of legends.

Gupta's rise through the ranks of Corporate America was stellar with enviable posts like board seats at Goldman Sachs and Procter and Gamble, co-founder of the prestigious Indian School of Business, adviser to the executive leadership of the Bill and Melinda Gates Foundation as also the United Nations dotting his resume.

Gupta was also a director of the AMR Corporation, the parent company of American Airlines.

The Rockefeller Foundation appointed him a trustee; he was named special adviser on management reform to then UN Secretary-General Kofi Annan and additionally served on the UN Commission on the Private Sector and Development and was co-chairman of the United Nations Association of America.

Gupta had also been getting support from family members, prominent business leaders and global philanthropic figures including Microsoft co-founder Bill Gates and former UN Secretary General Kofi Annan, who are among the 400 people who have written letters to Rakoff detailing Gupta's charitable work.

Gupta had pleaded not guilty to the charges and argued during his trial that he personally did not trade nor made any profits from the insider information he was accused of passing on to Rajaratnam, who is currently serving an 11 year prison term after being convicted last year.

After the guilty verdict was announced in June against Gupta, Bharara had said Gupta achieved remarkable success and stature, but he threw it all away.

"Rajat Gupta once stood at the apex of the international business community. He stands convicted of securities fraud. Having fallen from respected insider to convicted inside trader, Gupta has now exchanged the lofty board room for the prospect of a lowly jail cell," Bharara had said.

The maximum possible sentence for Gupta was 20 years for securities fraud and another five for conspiracy.

The Prosecution had sought a prison term of 8-10 years for Gupta who was convicted in a closely followed trial on three counts of securities fraud and one count of conspiracy.

Bharara argued that Gupta's "shocking" crimes were not an "isolated occurrence or a momentary lapse in judgement" and that a "significant term of imprisonment is necessary to reflect the seriousness of Gupta's crimes and to deter other corporate insiders in similar positions of trust from stealing corporate secrets and engaging in a crime that has become far too common".

Gupta, the most high profile Wall Street executive to be convicted in the government's crackdown on insider trading, had sought leniency from the judge, citing his otherwise unblemished career and philanthropic works.

In a memorandum filed in federal court last week, Gupta's lawyer Gary Naftalis had sought probation for his Harvard-educated client, saying Gupta is willing to live in Rwanda and work with the local government on health care and agricultural initiatives.

The second offer of community service made by Naftalis was that Gupta could work with Covenant House's New York site, which provides emergency shelter and other services for homeless, runaway and at risk youth.

Why the jail term?

But Judge Rakoff  eventually decided to be softer on Gupta than the eight to ten years recommended by sentencing guidelines.

He said that while the former McKinsey head has a life of charitable work to his credit, by disclosing confidential information to Raj Rajaratnam, he had stabbed Goldman Sachs in the back.

"The Court can say without exaggeration that it has never encountered a defendant whose prior history suggests such an extraordinary devotion, not only to humanity writ large, but also to individual human beings in their times of need," Rakoff wrote in his sentencing order. But Rakoff also noted that Gupta would be free to continue his charitable works after his prison term is over, and that some prison time was necessary as a deterrent to other inside-traders.

"When one looks at the nature and circumstances of the offence, the picture darkens considerably," Rakoff wrote, adding that "his criminal acts represented the very antithesis of the values he had previously embodied."

The judge went on to say:

As to specific deterrence, it seems obvious that, having suffered such a blow to his reputation, Mr. Gupta is unlikely to repeat his transgressions, and no further punishment is needed to achieve this result. General deterrence, however, suggests a different conclusion. As this Court has repeatedly noted in other cases, insider trading is an easy crime to commit but a difficult crime to catch. Others similarly situated to the defendant must therefore be made to understand that when you get caught, you will go to jail. Defendant’s proposals to have Mr. Gupta undertake various innovative forms of community service would, in the Court’s view, totally fail to send this message. Moreover, if the reports of Mr. Gupta’s charitable endeavors are at all accurate, he can be counted on to devote himself to community service when he finishes any prison term, regardless of any order of the Court.

At the same time, no one really knows how much jail time is necessary to materially deter insider trading; but common sense suggests that most business executives fear even a modest prison term to a degree that more hardened types might not. Thus, a relatively modest prison term should be “sufficient, but not more than necessary,” for this purpose.

... Human beings, as social animals, are programmed to respect moral values. This is why people without shame or guilt are considered psychopaths, and also why violations of the moral order raise such deep passions in the human breast. As people have come to understand that insider trading is not only a sophisticated form of cheating but also a fundamental breach of trust and confidence, they have increasingly internalized their revulsion for its commission. While no defendant should be made a martyr to public passion, meaningful punishment is still necessary to reaffirm society’s deep-seated need to see justice triumphant. No sentence of probation, or anything close to it, could serve this purpose.

After carefully weighing all these, and other, relevant factors, the Court concludes that the sentence that most fulfills all requirements of section 3553(a) is two years in prison. Rajat K. Gupta is therefore sentenced to 24 months’ imprisonment, concurrent on all counts, to be followed by one year of supervised release, on the terms stated from the bench and here incorporated by reference.

The otherwise mandatory forfeiture has been waived by the Government, but Court imposes a fine in the sum of $5,000,000. The Court will defer the determination of restitution for up to 90 days, as permitted by federal law. A formal Judgment embodying these terms and incorporating this Memorandum by reference will issue shortly. Meanwhile, Mr. Gupta is ordered to surrender to the designated prison by 2 p.m. on January 8, 2013.