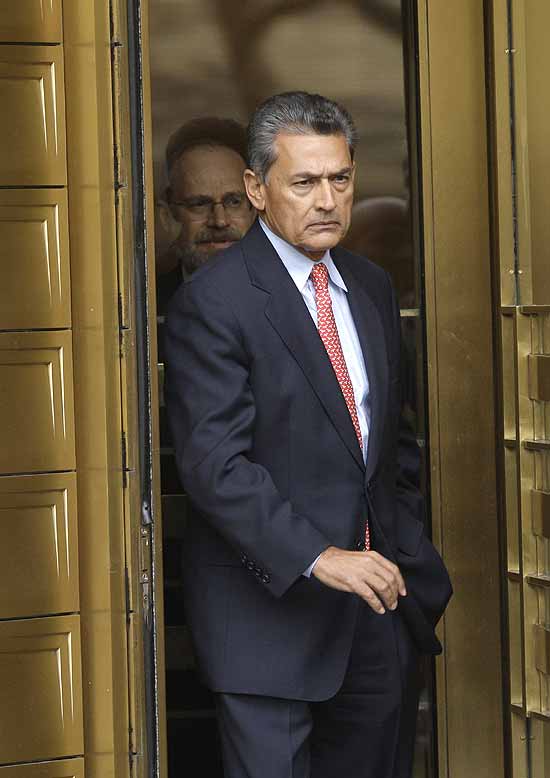 Former Goldman Sachs Director Rajat Gupta, the poster boy of Indians at the Wall Street, was today found guilty of illegally tipping off his friend Raj Rajaratnam of confidential market information, in one of America's biggest insider trading cases.

After three weeks of trial, a US court held the 63-year- old guilty of providing insider information to Galleon hedge fund founder Rajaratnam, who was sentenced last year to 11 years in prison for insider trading.

Gupta was found guilty by a federal court in Manhattan on four counts, out of six.

The court will pronounce the sentence on October 18.

The conviction marks a tragic fall for the Kolkata-born financial wizard, who rose from a modest background to become a force to reckon with at the Wall Street.

One of the jurors told the media it was a difficult decision for them but the evidence against him was overwhelming.

He said Gupta was a person who came to the US and rose through the ranks. He led a "story book life" and had full support of the family as he saw during the trial.

Gupta was convicted on three counts of securities fraud and one count of conspiracy for passing confidential boardroom information about Goldman and Proctor & Gamble companies to the hedge fund that earned millions of dollars trading on his tips.

He was acquitted of two counts of securities fraud.

Reacting to the verdict by a 12-member jury, defence lawyer Gary Naftalis said he was disappointed that the jury convicted Gupta on four charges.

"This was only round one of the case and we would appeal if necessary," said Naftalis, adding they continued to believe that Gupta acted with integrity and honesty and never pocketed a dishonest dime.

Gupta's wife and four daughters broke down as the jury read out the sentence but Gupta was expressionless.

As the jury left the court room, Gupta hugged his family members. He did not talk to media as he walked out of the courtroom.

Naftalis said that he was "pleased" that at least Gupta was acquitted on one count of disclosing information about P&G.

The verdict is being regarded as a major victory for US prosecutors as the government drives to stop leaking of corporate secrets to Wall Street.

"Rajat Gupta once stood at the apex of the international business community. Today, he stands convicted of securities fraud. He achieved remarkable success and stature, but he threw it all away," said Indian-origin chief Manhattan prosecutor Preet Bharara said in a statement.

"Having fallen from respected insider to convicted inside trader, Mr Gupta has now exchanged the lofty board room for the prospect of a lowly jail cell," he said.

Gupta was found guilty for passing information about the USD 5 billion investment by Warren Buffett's Berkshire Hathaway Inc, and of providing information to Rajaratnam on October 24, 2008 about Goldman stock.

There were five security fraud charges and once conspiracy charge against him.

Out of the five security fraud charges, he was found guilty on three and on the lone conspiracy charge.

FBI Assistant Director Janice K. Fedarcyk said the verdict was a "milestone" in the agency's drive, initiated in 2007, against illegal conduct in the hedge fund industry.

"Rajat Gupta broke the law, plain and simple. Gupta used his exclusive access to the board room to violate his fiduciary responsibility, repeatedly sharing confidential, inside information with his friend Raj Rajaratnam," said Fedarcyk.

The high-profile trial of Gupta, who served on the board of Goldman Sachs and headed McKinsey & Co, began on May 21 and lasted for three weeks.

Gupta will remain free on bail until his sentencing.

Besides his tenure at Goldman Sachs and McKinsey, which he ran from 1994 to 2003, Gupta served on the boards of the Rockefeller Foundation and the Bill & Melinda Gates Foundation. He is also a co-founder of the Indian School of Business in Hyderabad.

Much of the evidence against Gupta was circumstantial, including phone records that showed he promptly called Rajaratnam after receiving confidential information.

Gupta's defence, however, pointed out to the lack of direct evidence against him. They also told the court that Gupta had fallen out with Rajaratnam over a USD 10 million loss he incurred in investment with him.