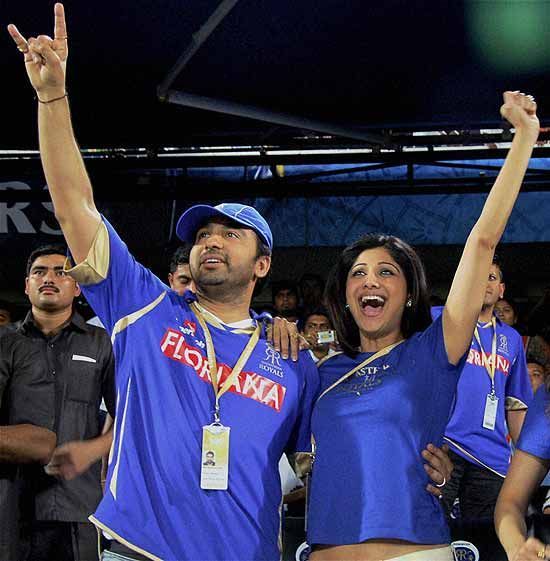 In sensational claims in the IPL spot-fixing scandal, Delhi Police today alleged that Rajasthan Royals owner Raj Kundra placed bets on his team through a bookie-friend and that they were probing whether his actress- wife Shilpa Shetty was also into betting.

Investigators also claimed Kundra (36) told them that he lost around Rs one crore in the past three years in betting in IPL matches. However, police said they have no evidence yet to implicate Kundra in fixing matches.

Shetty denied the allegations on Twitter saying her involvement in betting is "complete nonsense" and that she has "never bet on any cricket match ever". The tweets were retweeted by Kundra.

Kundra, a British national, was questioned for 11 hours yesterday after cricketer Sidharth Trivedi (30) told police that his business partner-friend Umesh Goenka (36) used to ask for information regarding team formation and pitches.

S N Srivastava, Special Commissioner (Special Cell), said Goenka in his statement before a magistrate informed that he used to place bets for Kundra besides making a reference to Shetty that she also placed bets "once".

"During questioning, Kundra has mentioned that he was placing bets for the last three years and the amount that he lost, all put together, was to be around Rs one crore," he said.

"It is in the statement (of Goenka that Shetty placed bets). We have not gone ahead and verified it as of now. But then we are in the process of verification," he said.

Srivastava said he cannot give a timeline to whether Kundra will be called again.

In Kolkata, Jagmohan Dalmiya, chief of the interim BCCI arrangement, said that the Kundra issue will be discussed at the BCCI emergency meeting on June 10 in New Delhi.

If police claims are to be believed, Kundra started betting in IPL matches after getting 11.7 per cent stake in Rajasthan Royals in the third edition of the T20 tournament.

Kundra is the second IPL team owner after Chennai Super Kings' Gurunath Meiyappan who is in the dock for alleged betting. If the charges against the owners are proved, BCCI can give Rajathan Royals the boot from IPL.

Police have confiscated the passports of Kundra and Goenka to ensure that they do not leave the country during investigations. Kundra has since flown back to Mumbai and will be quizzed again soon.

According to sources, Kundra became one of the owners of the team in the third season of IPL. From the next season onwards, Goenka started watching matches along with Kundra, who used give him match passes.

On the basis of Goenka's statement, he said, they had to call Kundra for questioning.

Reacting to police's claim, Shetty tweeted, "We love cricket, it's the passion for the sport that made us a part of IPL. It's extremely disheartening to keep clarifying that.

"For those who care, my apparent involvement in betting is complete nonsense and I have never bet on any cricket match ever. Truth will prevail. I won't be saying any more as the case is sub-judice," she said.

Police sources said Goenka, who was born in Sikkim, was into share and sponch iron business but he suffered losses. As he stayed near the residence of Kundra's mother, he became a family friend and later went to London where he met Kundra after his business collapsed.

In 2008, Goenka returned and started Ashwani Steel Private Ltd in which he had 16 per cent share while Kundra had 42 per cent stake.

Sources said the name of Goenka came during the recording of statement of Trivedi, a prosecution witness in the case.

In his statement recorded before a magistrate, sources said, Trivedi claimed that Goenka approached him and sought details about the cricket pitch in Ahmedabad and details about team formations.

To a question, the Delhi police chief said they have not invoked MCOCA in the case to deny bail to players. "We have applied law based on the crime committed," he said.

"There are reports that it has been slapped to prevent bail. But there is no such intention. We would apply the laws which are applicable in a case according to the nature of the crime," Kumar said.

Players S Sreesanth, Ajit Chandela and Ankeet Chavan were arrested on charges of spot-fixing during the recent IPL tournament after which they were sacked by Rajasthan Royals.

Delhi Police had earlier created a stir by claiming that Sreesanth and the two other players had acted at the "command" of underworld don Dawood Ibrahim and Chota Shakeel, among India's most wanted, as it invoked the stringent MCOCA against 23 accused in the case.

On their part, this is what Kundra and Shilpa Shetty had to say: