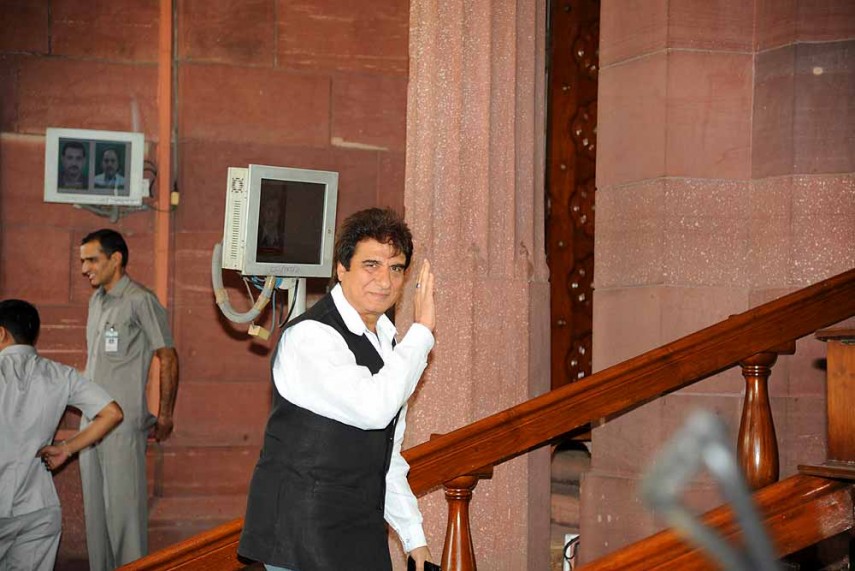 Actor-turned-politician Raj Babbar was today appointed as president of Uttar Pradesh Congress ahead of next year's assembly polls in the state.

Four senior vice presidents, including Imran Masood, who had courted controversy a few years ago with his hate speech against BJP's prime ministerial candidate Narendra Modi in 2014, were also appointed.

The announcement was made by party general secretaries Ghulam Nabi Azad and Janardan Dwivedi at a press conference at the AICC headquarters here.

The new senior vice pressidents are Rajaram Pal, a backward, Rajesh Mishra, a Brahmin, and Bhagwati Prasad Chaudhary, a Dalit, besides Imran Masood, a minority.

The outgoing UP Congress chief Nirmal Khatra has been made the chairman of the state screening committe.

Azad later said that Babbar is "above caste" and has an appeal across the country.

The announcement came after Azad met Sonia Gandhi this morning at her residence. Later, Priyanka Gandhi met him at his residence for over an hour, raising speculation over her assuming a bigger role in Uttar Pradesh ahead of polls.

Asked about Priyanka, Azad said that elections are still far away and have not been announced yet.

He, however, admitted that there have been demands from party members from the state that she should campaign for the party beyond Rae Bareli and Amethi.

Masood had courted controversy ahead of 2014 Lok Sabha polls when he said that he "will chop Modi into pieces".

Congress, which was once the dominant party in UP, had remained out of power in the state since long, losing out to the caste politics of Samajwadi Party and BSP.

Asked if Priyanka Gandhi will actively campaign in Uttar Pradesh, Azad said "everyone associated with Congress party has a role. She already has a role and it will continue like that."

On his meeting with her in the morning, he shot back "is there any ban on meeting?"

Prodded further, he said the assembly election in UP is yet to be declared and things will be chalked out soon.

Imran Masood, who was arrested for his hate speech in March 2014.

Asked about Masood's hate speech, Azad said "forget the past and look to the future." He added that BJP leaders have made even worse speeches.

Questioned on the controversial choice, Azad, the party's incharge in Uttar Pradesh, said "why don't you ask BJP about their ministers who are hate-mongers?"

After he was suspended from Samajwadi Party in 2006, he joined Congress in 2008 and was again elected to Lok Sabha from Firozabad constituency in Uttar Pradesh in 2009 by defeating Dimple Yadav, the wife of Akhilesh Yadav and daughter-in-law of Mulayam Singh Yadav. He was defeated in 2014 Lok Sabha poll from Ghaziabad by former Army chief Gen V K Singh.

Babbar had courted controversy as Congress spokesman in 2013 when he stated that Rs 12 are sufficient to get a full meal for a common man in Mumbai, a remark that drew severe criticism.

Raja Ram Pal (55), a backward caste leader and a former BSP member and a two-time MP, was expelled from Lok Sabha in December 2005 following a sting operation for accepting bribe for asking questions in Parliament. He was later expelled from BSP and later joined Congress. He represented Akbarpur Lok Sabha constituency in UP from 2009 to 2014 and earlier represented Bilhaur constituency as a BSP member.

Rajesh Mishra is a Brahmin from Varanasi and also represented Varanasi Lok Sabha seat in 2004.

Bhagwati Prasad Chaudhari is currently chairman of the SC cell of UP Congress.

Khatri, who was removed as State Congress chief, was adjusted as chairman of the newly-formed Screening Committee.

Azad said other committees like the Campaign and Coordination Committee would also be formed soon. The name of former Delhi Chief Minister Sheila Dikshit is doing the rounds for a bigger role in Uttar Pradesh and poll strategist Kishore has pitched for her too.