Rahul's Rating of the Modi Govt on Agriculture Issues: '0 Out of 10' 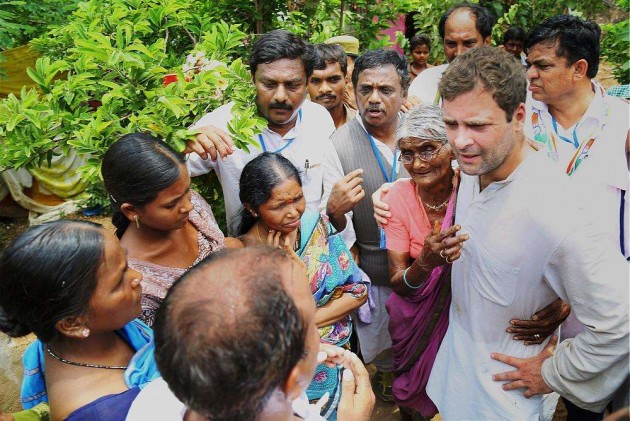 Taking his fight for farmers to his Lok Sabha constituency, Rahul Gandhi today said he would give "zero out of 10" rating to the Narendra Modi government on its handling of agriculture and rural issues.

Striking an aggressive note on the first day of his three-day visit to Amethi, the Congress Vice President also accused the Modi government of engaging in "politics of revenge" by cancelling a mega food park here and vowed to fight to get it back.

Hitting out at Modi, Gandhi said he was visiting foreign countries but not the homes of farmers in the country.

"The PM is visiting foreign countries, but he does not go to the houses of farmers and labourers," said Gandhi, as he met cultivators who have suffered crop loss due to unseasonal rainfall and hailstorms.

Asked by reporters how he would rate the NDA government's performance during first year in office, the Congress leader said, "If we talk of farmers and labourers, I will give zero out of 10 (to Modi government). (But) if some industrialists and corporate houses are concerned, I will give 10 out of 10."

He was interacting with reporters at Haidergarh in Barabanki district en route to Amethi.

At a kisan panchayat at Shankargarh in Tiloi assembly segment, Gandhi said, "Modi government has no emotions for the farmers."

Gandhi also took on the Modi government over the cancellation of a mega food park project in his constituency.

"BJP wants to hurt me through this politics of revenge. But, in reality the farmers are getting affected, and not me. The move of BJP-led government has affected farmers and labourers of Amethi and 10 neighbouring districts. BJP is playing such politics in other states as well like Punjab, Telangana, Maharashtra and Haryana, wherever farmers can be suppressed.

"But we will not be cowed down. We will pressure the government to get it back," he said, amid applause from the farmers, who shouted slogans in support of Gandhi.

His visit to Amethi came days after Union Minister Smriti Irani's tour of the Congress pocket borough - where she had unsuccessfully contested against Gandhi in the last Lok Sabha election - and her charge that he cared more for a business house than for the farmers of Amethi.

"Land had been allotted. Work was very much underway," Gandhi told a gathering of farmers at a 'choupal' at village Mirzagarh, addressing them from the bonnet of his jeep braving torrid weather conditions and high humidity.

Rahul sought to blunt the statement in Lok Sabha by Food Processing Minister Harsimrat Kaur that the food park's promoter company had expressed inability to pursue the project in the absence of natural gas, which was denied to it by the government in December 2012.

Kaur had said that in view of inordinate delay by the promoter company in meeting the "pre-conditions for final approval, in-principle approval accorded to the project by the Ministry was cancelled".

"You must get compensation because of the destruction the hailstorm did. But when we raise this question in Parliament, we get pressurised whether on roads, in UP, in Vidhan Sabha and also in Rajya Sabha and Lok Sabha as well. But we will fight for your rights," he told the farmers.

Noting the "sad part" that Congress is in government, neither at the Centre nor in Uttar Pradesh, he, however said, "Whatever we can do, be it on roads or in Parliament, we will do and fight for your rights."

The Congress leader alleged that under "Modi raj, the poor labourers and farmer are being neglected".

"If the public is asked to rate Modi's performance, he will get a zero," he said.

While targeting the Prime Minister over his travels abroad, he said, "Modi takes a cameraman on his foreign tours."