Rahul Takes On Modi in Massive Roadshow in Varanasi 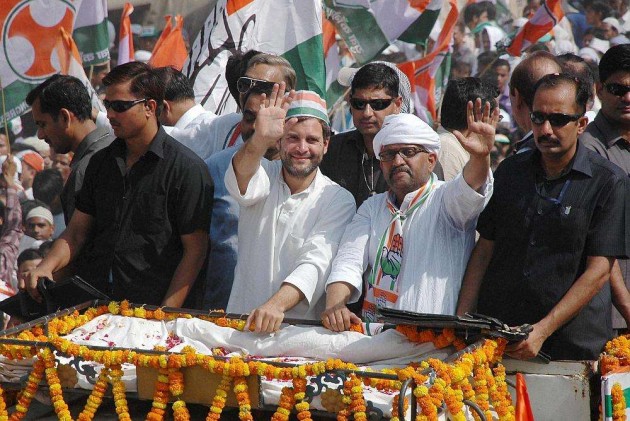 Print
A
A
A
increase text size
Outlook May 10, 2014 10:30 IST Rahul Takes On Modi in Massive Roadshow in Varanasi

Taking Narendra Modi head on, Rahul Gandhi today said the BJP's Prime Ministerial candidate does not understand the strength of India and its people and accused his party of following a politics that was "full of anger".

Also attacking him on snoopgate issue, Gandhi advised Modi to change slogans on his posters where it was promised that he would give power to women, as "he was the person sending police after women and tapping their phone in Gujarat."

"We (Congress) want to fulfil your dream. He (Modi) shows dream to Adani," Gandhi said, but clarified that Congress was not against industrialists.

"If the country has to move forward, then there has to be partnership between industrialists and labourers. Everybody will be part of the development, labourers, farmers and workers," he said.

Gandhi said that BJP leaders' speeches were "full of anger, but India works on love and not on anger."

"India is for everybody. It is for Hindus, Muslims, Sikh and Christians. It belongs to every caste and community, poor and rich people and it will remain for everybody."

On Modi, he said, "Few days back, I saw a poster in Delhi which had Modji's image and it was written that "Mahilaon ko main shakti doonga". Me, not we, only me."

"He (Modi) comes to you and says, you have not done anything. Nothing happened in India for the last 60 years. He asks farmers, workers, what have you done. Says India was sleeping.

"The US presidents understood that India has risen. Traders, farmers, industrialists, workers have took India forward. India has risen like a tiger and Modi comes to you and says make me Chowkidar. Nothing happened in the last 60 years. Modi says he will make the difference," Gandhi said.

Continuing his diatribe against the Gujarat Chief Minister, the Congress leader said that Modi tells women that they do not have power and he would give them the power.

The Congress Vice President said, "You (Modi) send police after a woman in Gujarat, you tape phone of the woman. You make police and Home Ministry listen to their conversation. Stop that. There is no need to give power. The country has power in itself. You please give this country little respect."

On the other hand, he said, the Congress leaders "come to you bowing our heads. We understand your strength. We cannot tell you you have done nothing in the last 60 years.

"We cannot say we will change the country. You will do it. Your power will change it. This is the difference between them and us. They (BJP) make people fight, spread anger. We spread love and compassion."

He also accused Gujarat Government of offering Rs 40,000 crore worth of farmland at throw away prices to an industrialist while seeking higher rates from the Air Force.

"Modi had provided 45,000 acres of agriculture lands at the rate of Rs 1 per sqm, while he demanded thousands of rupees for the same land from the Air Force," Gandhi said while taking a dig at "Modi's style of securing the nation".

Alleging that the Gujarat Chief Minister had favoured Adani by giving it Rs 40,000 crore worth of land, the Congress leader said the state government had provided just Rs 8,000 crore for education of children and health facilities.

"Modi's Gujarat model is focused on enhancing the fortunes of one person, but we (UPA Government) are giving attention to uplift of 70 crore people, who are between the Below Poverty Line and Middle Classes," he claimed.

Highlighting the achievements of the Congress led UPA Government, Gandhi drew the crowd's attention towards, scholarships for the students and MNREGA.

He said that he wanted that everyone should wear goods which were 'Made in Chandauli', instead of being 'Made in China'.

"We want to ensure 33 per cent reservation to women in assemblies and Parliament. The parties in Uttar Pradesh have been stalling the Bill providing for the reservation. They did not allow it. Our first job will be to ensure the reservation for women. We will open 2,000 police stations only for women. And we will recruit 25 per cent women in police," he said.

He asked the Chandauli's Congress candidate Tarun Patel to "fight for truth, fight for rights of the farmers, labourers and poor people."

He also thanked the people of Varanasi for giving him "so much love".