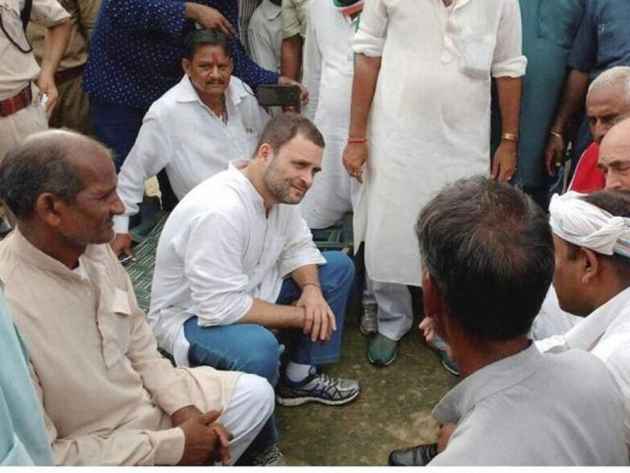 Congress vice president Rahul Gandhi who had been arrested  by police in Neemuch, Madhya Pradesh earlier today has been released along with around 250 Congress leaders, say reports.

He was earlier detained  when he tried to force his way into Madhya Pradesh with surging crowds of Congress supporters shouting slogans in praise of the farmer.

Hundreds of Congress workers as well as senior leaders like Rajasthan Congress chief Sachin Pilot and Madhya Pradesh legislator Jaiwardhan Singh also courted arrest. They were being taken to a guesthouse of a cement company, a police official said.

Gandhi, also accompanied by senior party leaders Digvijay Singh and Kamal Nath, defied elaborate police arrangements to prevent him from entering the state. Slogans of "Jai Jawaan Jai Kisaan" and "Rahul Gandhi zindabad" could be heard as the procession made its way towards Mandsaur, the ground zero of the farmer unrest where five people were killed on Tuesday, from Naya Gaon in Neemuch.

Congress VP #RahulGandhi being stopped by police from entering #Mandsaur
The police fired at farmers who were protesting,
6 people died pic.twitter.com/mttx58GcE0

Gandhi is expected to meet the protesting farmers and the grieving families of farmers  who lost their lives in the police firing.

There was high drama as the police tried to stop what had turned into a rally of sorts with Gandhi leading from the front. When police tried to push him back, he entered a field and was detained.

Determined to meet the families of farmers in distress, he walked for close to 100 metres before entering Madhya Pradesh from Dalia village in Rajasthan's Chittorgarh district, police said.

“Before entering MP, Gandhi rode pillion on a motorcycle in Nimbahed in Chittorgarh district for about five to seven kilometres,” IG Udaipur Anand Srivastava told PTI.

“Gandhi reached Udaipur from Delhi in a chartered plane and left for Madhya Pradesh in a four wheeler by road... After the bike ride, he walked to cross the border,” he said.

There are almost 2,000 people and nearly 150 vehicles with Gandhi, sources at the police control room said.