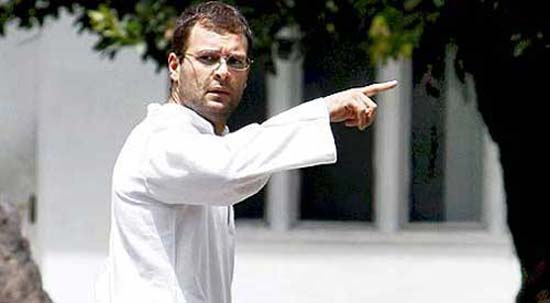 outlookindia.com
-0001-11-30T00:00:00+0553
Rahul Gandhi today sought to stave off a controversy that he had forced the pilot to land his helicopter in poor visibility conditions in Sitapur last evening and virtually snubbed Uttar Pradesh Congress President Rita Bahuguna Joshi who triggered it.

"I am a pilot and I am absolutely aware of the dangers of flying in low visibility conditions. I will be the last person to do it," he told a press conference, dismissing Joshi's remarks that he had forced the pilot to land in "zero visibility" just to fulfil his commitment of meeting people.

Gandhi said he was one of those persons who followed security procedures completely. "You can also ask the Special Protection Group (SPG) if I have broken any rules or procedures."

Joshi was seated by his side.

"The PCC President is not a pilot. She is not an expert on weather condition. I have not put any pressure on the pilot. The pilot called me aside this morning and told me that the media was creating a controversy and putting my job in trouble. He has not broken any rule. You are making a story and destroying their career. This is not fair," he said.

"We had to leave in 15 minutes because it was so dark. Putting our life in danger, we landed the helicopter in zero visibility in Sitapur. The pilot was not ready to land but Rahul Gandhi was forced him to land. You should see his commitment",  Rita Joshi had told reporters last night.

Meanwhile, Sitapur district administration said the helicopter had landed after sunset when the visibility was "poor".

District Magistrate Sanjay Kumar, who has submitted a report to the Home Department in Lucknow, said "it is on record that the Congress leader landed after sunset. While sunset was at 5.13 pm he landed here around 5.30 pm yesterday."

However, Gandhi said there was plenty of visibility when the helicopter landed.

Kumar said the administration could have not stopped Gandhi from landing as several aspects were involved. "If a chopper is air borne, there is no way of stopping it from landing. Besides, there are several other aspects as well.

"But it is sure that by that time visibility was poor," he said.

Kumar said 39-year-old Gandhi also did not avail of the bullet-proof vehicle assigned for him in his convoy.

"Instead of travelling in his bullet-proof vehicle, he took another vehicle," the DM said.