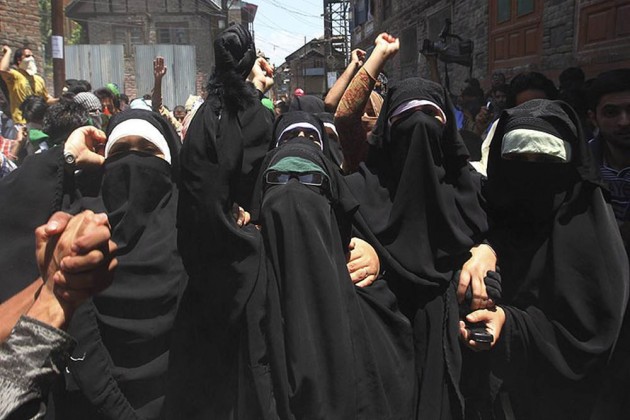 A group of DeM activists led by Asiya Andrabi had gathered in Bachpora area on the outskirts of the city.

Separatist activists have been hoisting Pakistani flags on August 14 for more than two decades.

In the early days of militancy in Kashmir during 1990s, militant groups like Hizbul Mujahideen would hold full-fledged parades to mark this day.

Meanwhile, reacting to the hoisting of Pakistan flags by Andrabi, BJP said by indulging in such "nonsense" she was trying to be in news and was "provoking" youth.

"By indulging in such nonsense actions, Andrabi is trying to be in news and is provoking youth to indulge in terrorism and violence," BJP spokesman Khalid Jehangir said here.

He dared the separatist leader to hoist the Pakistan flag along with her sons in an open ground rather than remaining confined to the four walls of her house.

"If she is obsessed with the idea of Pakistan and is so much inclined towards hoisting Pakistan flags, she should come out in open and ask her both the sons to lead from the front," Jehangir said.

The BJP spokesman said Andrabi was a "hypocrite" who wants Kashmiri youth, other than her sons, to take up arms and "end up in graveyards".

"She has often expressed that (Parliament attack convict who was hanged in 2013) Afzal Guru is a role model for youth of Kashmir.

"She should start grooming these role models from home. The two sons of this hypocrite woman are studying in Malaysia. She has ensured that her sons remain safe. However, she wants other Kashmiri youth to take up arms and end up in graveyards," he said.

The BJP spokesman advised the youth not to fall prey to the propaganda of the separatists, who he said, "Want Kashmiri youth to become cannon fodder just for the sake of money and to appease their bosses sitting across the Line of Control (LoC)".