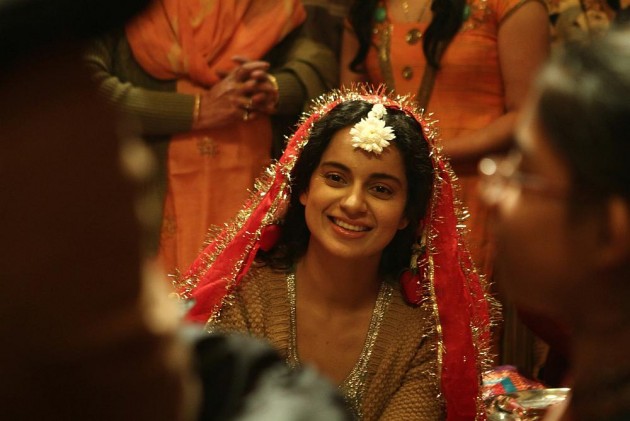 Kangana Ranaut won the best actress award for her endearing performance in Queen while Vishal Bhardwaj's Haider walked away with five honours at the 62nd National Film Awards, announced today.

Court, which focuses on the flaws in the Indian judicial system, has been winning critical acclaim nationally and internationally. The award is expected to give a major boost to the movie ahead of its theatrical release on April 17.

"This award is a sign of encouragement and assurance that you can follow your heart and not necessarily compromise on your vision," Tamhane told PTI.

Ranaut, 28, who celebrated her birthday yesterday, won her career's second National award in the movie about a girl, who goes on a foreign honeymoon alone after being dumped by her fiance. Her earlier win as best supporting actress was for Fashion in 2010.

Bhardwaj was also named for best dialogues in the movie while Sukhwinder Singh clinched the best male playback singer gong for the song Bismil. Its other two wins were in the categories of choreography and costume design.

"The National award win makes you feel more fearless. And it again reiterates the fact that I should just follow my heart and not look for other people's approval for my work," Bhardwaj told.

Sanchari Vijay was declared the best actor for his poignant portrayal of a woman trapped in a man's body in Kannada film Nanu Avanalla Avalu (I am not a he, but she).

"I am elated. Playing the character of a transgender was very difficult though I had played this character earlier in the tri-lingual film, but that was a very small role," Vijay said post the announcement.

Chotushkone, a film about four directors' attempt to make four short stories, won two more awards -- best cinematography and screenplay (original). Srijit dedicated the win to late Rituparno Ghosh who was supposed to star in it.

"I dedicate this award to Ritu da (Rituparno Ghosh) and to the rest of the team involved in it. Ritu da was a part and parcel of the team which made Chotushkone," he said.

"I hate losing. But if I had to take a back seat to anyone this year it would be U #KanganaRanaut! Congratulations! yay Queen!#SmallTownGirls," Priyanka tweeted.

While best songs in the music direction category went to Bhardwaj, the background score trophy was won by Gopi Sunder for Malayalam film Nineteen Eighty Three.

The National Film Awards are likely to be given by President Pranab Mukherjee on May 3 along with the Dada Saheb Phalke award which will go to actor-filmmaker Shashi Kapoor this year, an official said here.