Putin Preferred Hillary At White House As This Would Have Made America Weak: Trump 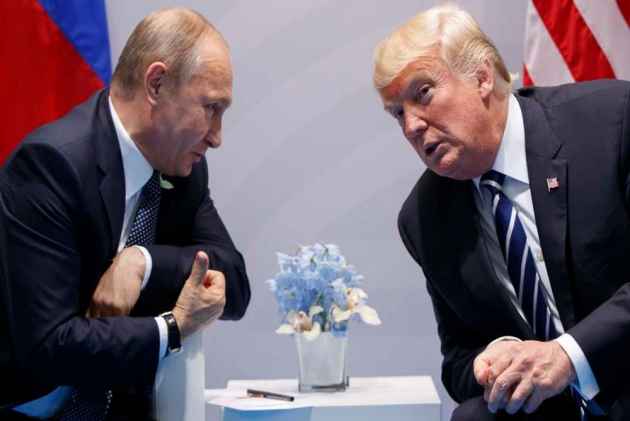 Print
A
A
A
increase text size
Outlook July 13, 2017 09:17 IST Putin Preferred Hillary At White House As This Would Have Made America Weak: Trump

President Donald Trump has said that his Russian counterpart Vladimir Putin would have been happier if his Democratic rival Hillary Clinton had won last year's general election, as this would have made America weak.

In his first major interview after his last week's maiden meeting with Putin in Hamburg, Germany, on the sidelines of the G-20 Summit, Trump said he and the Russian leader both are advocating interest of their respective countries. But there is scope for co-operation between the two at the global stage.

"We are the most powerful country in the world and we are getting more and more powerful because I'm a big military person. As an example, if Hillary had won, our military would be decimated. Our energy would be much more expensive. That's what Putin doesn't like about me," Trump told Christian Broadcasting Network (CBN) in an interview.

"And that's why I say, why would he want me? Because from day one I wanted a strong military, he doesn't want to see that," he said, according to the excerpts of the interview released by CBN.

"He would like Hillary where she wants to have windmills. He would much rather have that because energy prices would go up and Russia as you know relies very much on energy," he continued.

The full interview is scheduled to be telecast today.

"So there are many things that I do that are the exact opposite of what he would want. So what I keep hearing about that he would have rather had Trump, I think 'probably not,' because when I want a strong military, you know she wouldn't have spent the money on military," he said.

In the middle of a political storm, because of allegations of Russian connections by his campaign, Trump said the two countries can get along together.

"Well he wants what's good for Russia, and I want what's good for the United States. And I think in a case like Syria where we can get together, do a ceasefire, and there are many other cases where getting along can be a very positive thing, but always Putin is going to want Russia and Trump is going to want the United States and that's the way it is," Trump told CBN.

His meeting with Putin in Germany last week went quite well, he said.

"Sometimes you're not going to get along on things and sometimes you will. But we had a good meeting, it was a face to face meeting, it was a long meeting. It was two hours and 15 minutes. Everyone was surprised by the amount of time but that was a good thing and not a bad thing," he said.

Syria is one area where there is potential of a large cooperation. "I think we had an excellent meeting. One thing we did is we had a ceasefire in a major part of Syria where there was tremendous bedlam and tremendous killing. And, by the way, this is now four days," Trump said.

"The ceasefire has held for four days. Those (previous) ceasefires haven't held at all. That's because President Putin and President Trump made the deal, and it's held. Now, I don't know what's going to happen. Maybe as we're speaking they start shooting again. But this has held unlike all of the other ceasefires that didn't mean anything," he said.