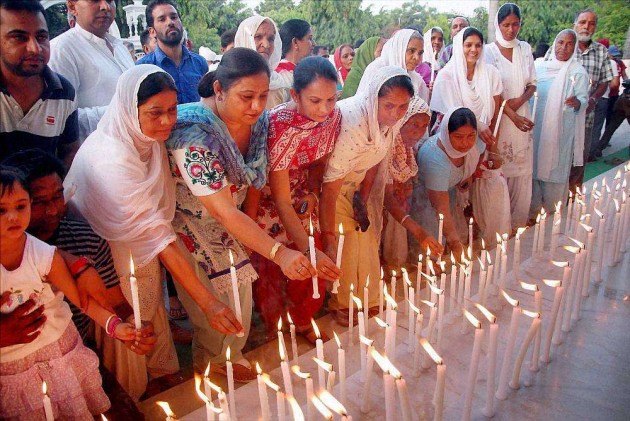 Punjab Education Minister Surjit Singh Rakhra today triggered a controversy by making an insensitive comment that the death of the teenage girl, who was molested and thrown off a bus belonging to the ruling Badal family, was God's will.

'Nobody can stop accidents. Whatever happens does so by God's will.

"We can always meet with an accident. We will do more for the people....What has happened is unfortunate. You cannot go against nature's will," he said.

Rejecting government compensation and demanding action against the owners of the vehicle, family members of the girl have refused to perform her last rites.

"There is no headway on this issue (on the cremation)," Moga SSP Jatinder Singh Khehra said.

The body of girl has been kept in a mortuary at Singhawala village here.

All attempts by the state authorities to persuade the bereaved family to cremate her proved futile after they rejected a compensation of Rs 20 lakh, a government job for her mother, her free treatment and holding trial of the case in a fast track court.

The family was insisting that the owners of the bus, Orbit Aviation, be booked in connection with the offence and its road permits be cancelled, a demand vociferously supported by AAP.

"I want justice. I want justice for my daughter. FIR should be registered against those whom the bus belonged to," victim's father had said yesterday.

Meanwhile, Rakhra denied making any insensitive remarks pertaining to the Moga bus incident, saying he was being quoted out of context.

The Higher Education, Languages and Water Supply minister said he had not visited Moga since the incident took place.

"I never made any comment or answered any question about the Moga bus incident. My comments are being twisted and are being quoted out of context by the media," he said.

The Minister said that he had gone to a private college to inaugurate a girls' hostel in Patiala yesterday.

"There it was proposed that girl's colleges be opened in surrounding areas and measures be taken to prevent accidents as girls travel from far off areas. I said that we cannot stop all accidents. They (media) raised question about the Moga incident but I said I do not have any direct knowledge about the incident as I was not there.

"But they (media) presented my view in a twisted manner linking it with Moga incident which is quite unfortunate," he said.

Earlier, Rakhra courted a controversy, saying at Patiala that accidents are "God's will."

"...Who can fight against nature? Accidents do take place even in our homes. There are accidents involving aeroplanes as well, so this is all God's will," Rakhra said.

"Look, we also keep travelling every day. We do not know where the accident may happen," said Rakhra.

When he was asked whether he wanted registration of FIR against Sukhbir Badal, he had said, "FIR can be lodged against him (Sukhbir) after all he is a human being."

"Is there nobody in the world who can lodge FIR against him (Sukhbir)," he had questioned yesterday.

The 13-year-old victim and her mother were thrown off the moving bus by a group of men, including the conductor, after they resisted molestation attempts on Thursday.

Meanwhile, Punjab Congress led by its chief Partap Singh Bajwa has given a call for 'Rail Roko' agitation for an hour starting at noon to protest against the "deteriorating" law and order situation in the state and to draw attention to the farmers' problems.

"The deteriorating law and order situation will be part of the 'Rail Roko' agitation whose main focus will be the demands of the farmers," he said.

Congress Spokesperson Randeep Surjewala charged that the family has refused to cremate the victim as the police is pressuring them to arrive at a compromise.

"Ministers of Akali Dal-BJP government are giving out insensitive statements. This is inhuman and completely reflects the arrogance of power that has surpassed the basic tenets of humanity," he said.

"The government has taken all action possible within its limits till now. The opposition parties including AAP and Congress are simply adding fuel to the fire. They are misleading the family and bringing disrepute to the girl's modesty," he said.

As far as the compensation issue is concerned, he said "It has been given as ex-gratia and not as a bribe. The opposition is watching the drama and doing nothing. They (family) have not refused to take compensation from us. Infact they were the ones who demanded money and a job."

"We got a special exemption from the government to give a job in the corporation to their 16-year-old son," he said.

Continue FREE with Ads Pay Rs. 1 to Read Without Ads
READ MORE IN:
Sukhbir Singh Badal National
Next Story : It's a Girl! for Kate and Prince William
Download the Outlook ​Magazines App. Six magazines, wherever you go! Play Store and App Store