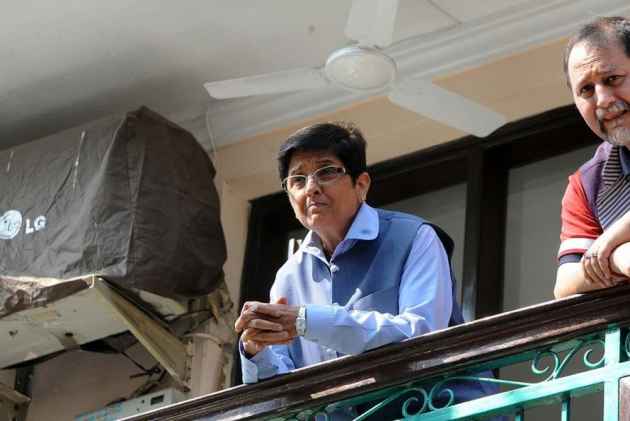 The tussle between Lt Governor Kiran Bedi and the Congress government here intensified with the chief minister today accusing her of paralysing the administration by making derogatory remarks against the MLAs, ministry and officials through social media.

Bedi had earlier hit out at Puducherry Chief Minister V Narayanasamy for his remark that the LG should not act beyond mandate, asking if he wanted a rubber stamp or a responsible administrator.

Puducherry needed justice, integrity and good governance, Bedi, who has been at loggerheads with the state government on certain issues, said in a WhatsApp message in a group comprising media persons and eminent personalities.

In the state Assembly, after the Zero Hour, members belonging to the ruling Congress, the DMK and the opposition AIADMK (Amma) alleged that Bedi had been making unbridled comments against the ministry, officials and legislators.

They asked the chief minister to ensure that effective steps were taken to end the trend of the Lt Governor criticising the elected representatives.

R Siva (DMK) and Government Whip R K R Anandaraman drew the attention of the House to the "objectionable" comments of the Lt Governor and referred to the Whatsapp message.

Welfare Minister M Kandasamy said, "Bedi has been intolerant towards the elected ministry."

"She is projecting herself as a mouthpiece of the BJP.. Nothing could be done by government ever since she became the Lt Governor," the minister claimed.

He also appealed to Speaker V Vaithilingam to arrange for a joint meeting of all Puducherry MLAs with the president, prime minister and Union home minister to apprise them of the "hurdles" Bedi has been creating in smooth functioning of the government.

Responding to the MLAs' views, Narayanasamy said it was indeed "disturbing that Bedi has been making "uncontrolled comments against the ministry, officials and legislators."

"She is paralysing the work of the elected ministry in Puducherry," he said.

Several important decisions of the Cabinet were left hanging following the return of files by the Lt Governor, he added.

Narayanasamy said no official should hereafter accompany Bedi during her weekend visits to constituencies without getting prior permission from the concerned ministers.

"I would only appeal to the legislators to picket the Lt Governor whenever she comes to their constituencies without intimating them," he said, maintaining that she was "only after publicity" by making such visits.

He took strong exception to Bedi "trying to paint a bad image about the government among the public".

He also read out statutory provisions to drive home the point that a Lt Governor can only aid and advise elected ministry and could not overstep her limits on any count.

Opposition AINRC member N S J Jayabal, however, said the "whole chaos in the government has arisen because of failure of the elected ministry to do administrative works properly".

This irked Naryanasamy who levelled allegations against the previous AINRC government and asked Jayabal to come out with firm evidence before finding fault with the government.

When the chief minister was criticising Bedi, AIADMK (Amma) legislature party leader A Anbalagan wanted a resolution to be passed to recall her.

Siva wanted the speaker to adjourn the proceedings and adopt a resolution urging the Centre to intervene and punish Bedi.

Vaithilingam asked members to first prepare the resolution and place it on the table of the House.

Bedi had earlier said, "He (Naryanasamy) wants a Lt Governor who is just an onlooker and passes time and enjoys benefits of the expensive establishment called Raj Nivas without meeting people or questioning officers and would do what he tells even in writing."

"People are crying for justice, students and parents are crying for admissions as per the orders of Government of India and higher judiciary," she said, asking who would hear them and speak for them.

She said Raj Nivas was now becoming their last hope.

"Does he want a rubber stamp or a responsible administrator," she had said.

In January this year, Congress and DMK MLAs demanded that the Centre recall Bedi, accusing her of having a "dictatorial" style of functioning which bypassed the elected legislature.

Bedi had last month met Home Minister Rajnath Singh in New Delhi and apprised him of the "constraints" she faced in serving the Union Territory.

Last year, Bedi had threatened to quit and leave the Union Territory if there was no improvement in the situation.

Continue FREE with Ads Pay Rs. 1 to Read Without Ads
READ MORE IN:
Kiran Bedi National
Next Story : 8 Killed, 9 Others Injured In An Explosion At Petrochemical Plant In China
Download the Outlook ​Magazines App. Six magazines, wherever you go! Play Store and App Store