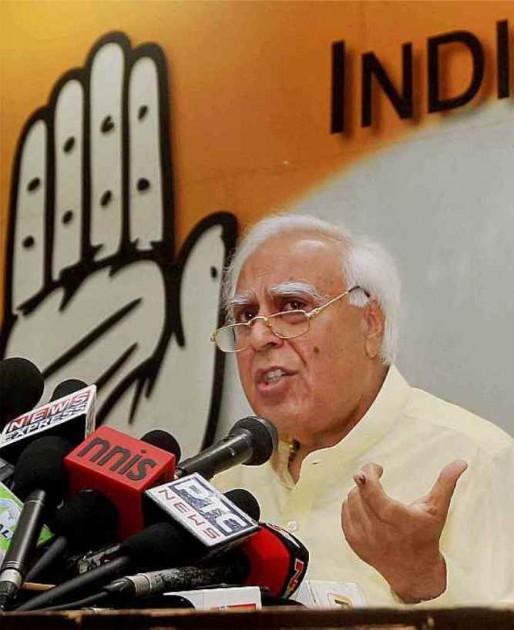 Congress on Tuesday demanded that Prime Minister Narendra Modi provide details of bank transactions of BJP and its MPs made before November 8 when the demonetisation move was announced if he was "really serious" on the issue.

The Congress' demand came after Modi, earlier in the day, asked BJP MPs, Ministers and MLAs to submit their bank account statements between November 8, the day he announced the demonetisation, and December 31 to party chief Amit Shah on January 1, 2017.

"First tell us, payments to Shakhayee (RSS units) made through which cheques? Tell us how much money was deposited by MPs and the party before November 8? Tell us what happened in West Bengal and Bihar? If he tell us these, then I would feel that the prime minister is really serious on the issue," Kapil Sibal, the  party spokesperson said.

Stressing that he was "not levelling any charges" on BJP, Sibal said "I am only saying that if you need transparency, then you should tell how much money was deposited in MPs and party account before November 8."

On the issue of disruptions in Parliament, he said in a lighter vein, "this is what (Finance Minister) Arun Jaitley has taught us. Please ask him. He has said disruption is part of parliamentary strategy otherwise the message does not go home. So, we are learning from the great parliamentarian."

He, however, clarified that the Opposition party was raising the people's issue.

"Eighty people have died due to this demonetisation and we should sit quitely? This is not some alleged coal scam or alleged other scam, it is a scam where 80 lives have been lost and we should keep quiet? We should make an open statement, according to BJP, that prime minister need not come to the Parliament?," he asked.

Terming as "thoughtless, mindless" the demonetisation exercise, Sibal said the prime minister is shying away from giving a reply on the issue because he cannot answer the concerns raised by the Opposition.

"We are seeing the results on other ground, that is why he does not want to come. We want prime minister to participate in the debate and the House must be assured that PM will come. That is our demand," he said.

On amendments to Income Tax Act, he said the "mind of the BJP is exceptionally flexible because everyday it changes its mind. "We are extremely delighted by the fact that they are so flexible that they don't know what to do."

"When they see a difficulty coming, they change their mind. Prime Minister and this government should have thought these things thorough and had a policy framework in place before they took these adhoc decisions," he said.

Claiming that since November 8, the RBI and other authorities have changed the directions atleast 175 times he said, this does "not augur well" for the country.

On the terror strikes in Jammu, the Congress leader said when the "surgical strike" be a success, as about 18 defence personnel have lost their lives since the surgical strike was carried out and 300 border violations have occured.

Meawnhile, BJP MP Babu Supriyo hailed the Modi's direction to his functionaries to disclose the financial details, saying the move proves that "charity begins at home and honesty should start from your own backyard"

"Agay agay dekhiye sarkar kis tarah ke kadam uthati hai (Let's see what measures the government takes). Directions to MPs and MLAs proves that charity begins at home and honesty should start from your own backyard," he said.