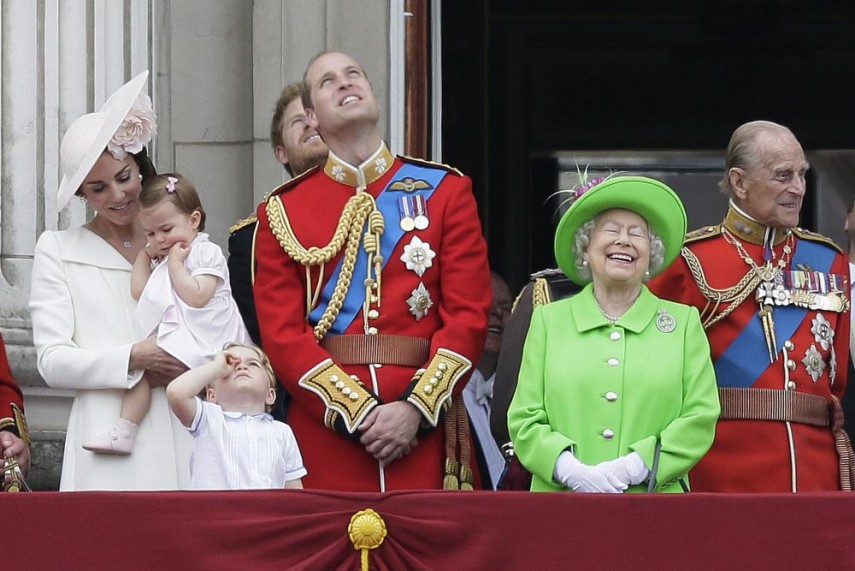 Queen Elizabeth II marked her official 90th birthday today by taking salute at a special military parade in London where one-year-old Princess Charlotte proved to be the star attraction.

The baby Royal made her first public appearance on the Buckingham Palace balcony in her mother Kate's arms.

Her father Prince William and brother Prince George, 3, were by her side as part of the annual tradition where the monarch makes an appearance to view the Royal Air Force (RAF) fly past in her honour.

Both baby royals, third and fourth in line to the British throne, were dressed in pale colours, with George wearing white while Princess Charlotte wore a pale pink dress.

Earlier, Kate and William joined the Queen and the Royal Family for the annual Trooping the Colour ceremony.

The traditional parade was this year celebrating the monarch's 90th birthday, who wore an unusually bold dress and hat combination of bright green that caught the eye of many.

They travelled from Buckingham Palace to the Horse Guards in horse-drawn carriages, where thousands of people gathered to catch a glimpse of the Royal family.

There, the Royal family watched the parades as the Queen inspected her soldiers.

Salutes were fired across the UK.

In the afternoon, the royal barge Gloriana led a flotilla of about 50 boats in a pageant down the River Thames, carrying figures including five-time Olympic gold rower Sir Steve Redgrave.

Visible in her vibrant ensemble, the Queen smiled and waved to crowds as she was driven with her husband and Duke of Edinburgh Prince Philip, who wore a ceremonial red military uniform, in an open-top carriage up the flag-lined Mall.

Queen Elizabeth celebrates two birthdays as part of a royal tradition, dating back over 250 years.

But her official birthday is marked in Britain on a Saturday in June with Trooping the Colour.