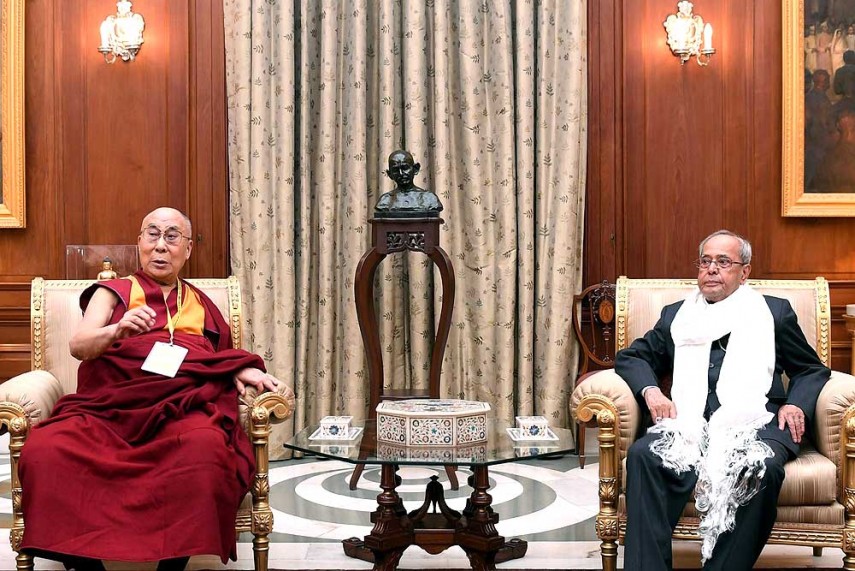 China today took strong exception to Tibetan spiritual leader the Dalai Lama's meeting with President Pranab Mukherjee at the Rashtrapathi Bhavan during a children's summit, saying India must respect China's "core interests" to avoid "any disturbance" to the bilateral ties.

"Recently in disregard of China's solemn representation and strong opposition, the Indian side insisted on arranging for the 14th Dalai Lama's visit to the Indian Presidential palace where he took part in an event and met President Mukherjee," Chinese Foreign Ministry spokesman, Geng Shuang told a media briefing here.

"The Chinese side is strongly dissatisfied with and firmly opposed to that," he said, replying to a question on the Dalai Lama's presence in the opening session of the 'Laureates and Leaders for Children Summit', organised by Nobel Laureate Kailash Satyarthi's Children's Foundation on December 10.

"The Dalai Lama is in political exile and is long been engaged anti-China separatist activities with the attempt of separating Tibet away from China under the cloak of religion," Geng said.

The Chinese side firmly opposes any form of contact between officials of the other countries with him.

"We urge the Indian side to see through the anti-China separatist nature of the Dalai Lama clique, fully respect China's core interests and major concerns, take effective means to remove the negative impact caused by the incident to avoid any disturbance to China-India relationship," Geng said.

This is the second time that China objected to the Dalai Lama's activities in India in recent months.

Beijing objected in October this year to India's permission to the Tibetan spiritual leader to visit Arunachal Pradesh, which China claims as part of southern Tibet.

Early this month, China also objected to the visit of prominent Tibetan religious leader, the 17th Gyalwang Karmapa Ogyen Trinley Dorje to Arunachal Pradesh, hoping that India would abide by consensus and refrain from taking any action that might complicate the boundary dispute.

India also came under the criticism from Chinese official media over the Dalai Lama's visit to Mongolia following which Beijing was accused of imposing a blockade of the land-locked country.

While China besides criticising Mongolia for permitting the Dalai Lama reportedly blocked movement along the Mongolia-China border, Beijing was also livid over the Mongolian Ambassador to India Gonchig Ganhold’s appeal to New Delhi to help Mongolia to deal with China’s countermeasure against Ulaanbaatar.

India has said Mongolia can avail the USD one billion aid, which one of the Chinese newspaper Global Times termed it as a bribe.

An article in the daily also warned Mongolia that it is "politically harebrained" to ask for New Delhi’s support as it will further complicate bilateral ties.