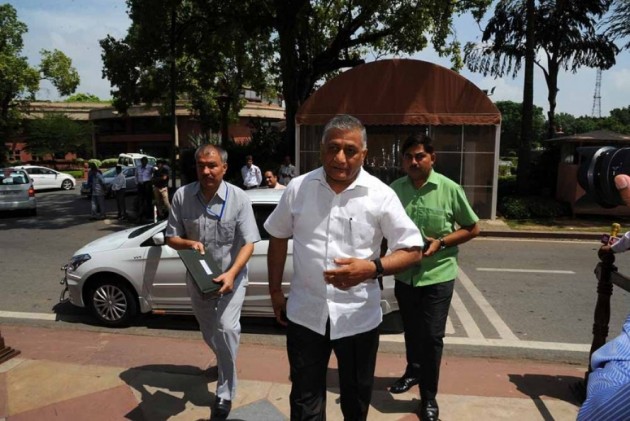 Print
A
A
A
increase text size
Outlook November 21, 2016 23:07 IST Press Council of India Gives Clean Chit To VK Singh Over His Remarks On Dalits

The Press Council of India (PCI) has given a clean chit to Union Minister V K Singh over his alleged remarks comparing death of Dalits with that of dogs.

"Considering the responses of Singh and various newspapers on the issue, the Council opined that he did not compare the killing of Dalits with dogs as what was stated by him was in the context of the responsibility of the government which the newspapers projected as analogy for Dalit killing.

"It, therefore, warned the newspapers to be more careful in future and to bear in mind that their duty is to collect news and place it perspective rather than to create news or sensationalise it," PCI said in a release.

On another alleged statement by Singh that "journalists be sent to Agra", the Council said it were meant only for those journalists who gave distorted version of his earlier statement and not for the media as a whole and therefore it held that "no action needs to be taken against him".

PCI has inked an MoU with its counterparts in Nepal and Bangladesh for securing press freedom and promotion of its standards and ethics worldwide.

"The Council interacts with Press/Media Councils and similar bodies in different parts of the world for active encouragement for preservation of the press freedom and promotion of its standards and ethics worldwide.

"As a part of these efforts, the Chairman of the Council signed Memorandum of Understanding with his counterparts in Nepal and Bangladesh on November 17, 2016 at New Delhi," PCI said in release today.

According to the release, the Council also "warned" the 'Outlook Magazine' for attributing a statement that "Narendra Modi was the first Hindu Prime Minister in 800 years" to Rajnath Singh.

PCI said it has also adjudicated 53 complaints against the Press and 29 by the Press and 141 matters were disposed on preliminary stage for default of mandatory requirements.