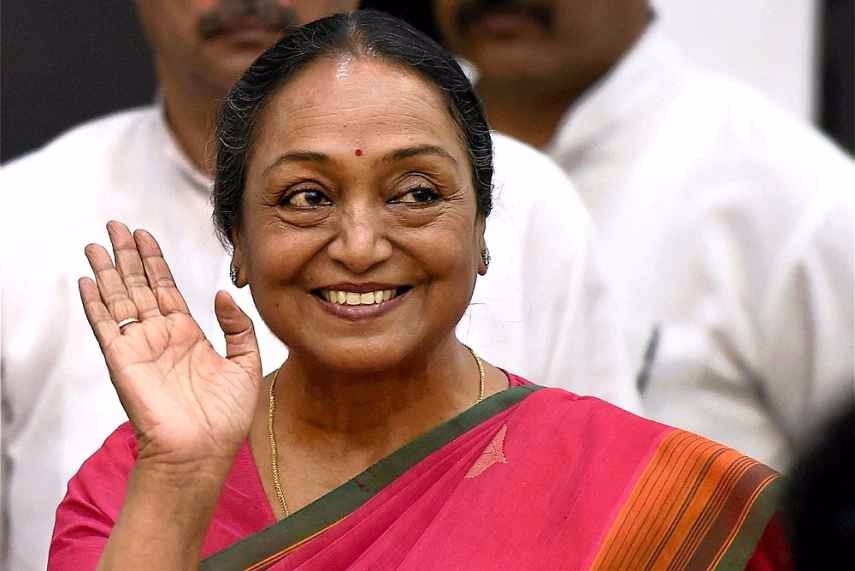 The contest for the country's highest office is a battle between two ideologies, the opposition's presidential nominee Meira Kumar said today claiming that the "principles and ideologies" on which the country is based were facing danger.

Kumar, who met leaders from Jammu and Kashmir, Punjab and Haryana, to seek support, said in Srinagar today that the opposition wanted to make the presidential poll an election of principles.

"These are the principles which are close to my heart and to the hearts of most of the people of this country. India is united because we believe in these principles. There are so many religions in the country, so many cultures, ideologies and languages, but despite that, the country is united only because of these principles," she said.

Kumar claimed that the presidential poll was an opportunity to stop a danger that is lurking against the "principles and the ideologies" on which the country was based.

"Since some time now, a danger is lurking on these principles and ideologies and if that is not stopped immediately, then it is possible that the coming days will be lost in the dark," she claimed.

Kumar said that she had written letters to all the members of the collegium – the MPs and the MLAs – irrespective of their parties asking them to listen to the voice of their conscience and support her.

In Chandigarh, Kumar said that she had respect for rival NDA contestant Ram Nath Kovind, but the upcoming election was a battle of two ideologies.

"Earlier, the presidential election used to be a fight between two individuals. For the first time, it is going to be a contest between two ideologies," 72-year-old Kumar said.

To a query, she said it was a "sad situation" that the presidential poll was being dubbed as a 'Dalit vs Dalit' contest.

"When an election to the highest office is being held, the Dalit issue is being raised. Earlier, the capabilities, merits and achievements of the two candidates used to be discussed and no one talked about their caste," she said.

Kumar lamented that since the battle this time was between her and former Bihar governor Kovind, both of whom were Dalits, nothing else was being discussed but their caste.

"We are in the 21st century and India wants to become a modern country. But, this kind of a mindset is a mismatch when it comes to the aspirations of a modern nation," she said.

Kumar said India always stood up against communalism and casteism. "But now, we have been seeing that these (communalism, casteism) are being promoted and therefore, we are worried. We feel that the coming days are going to be dark," she added.

Asked about Bihar chief minister Nitish Kumar not supporting her, Kumar replied that "this happens in life and most often in politics that some friends have such thinking".

Asked if the Aam Aadmi Party (AAP) was supporting her candidature, Kumar answered in the affirmative. "We are getting their support," she said.

She refused to comment on Punjab Chief Minister Amarinder Singh's assertion that the opposition should have announced its candidate for the presidential poll before the ruling NDA saying, "What can I say to this?"

In Chandigarh, Kumar met the Congress MLAs and MPs from Punjab and Haryana to seek their support for the July 17 presidential poll.

In Kashmir, Kumar addressed a joint meeting of legislators and senior leaders of NC and Congress. CPI(M) MLA M Y Tarigami was also present at the meeting.