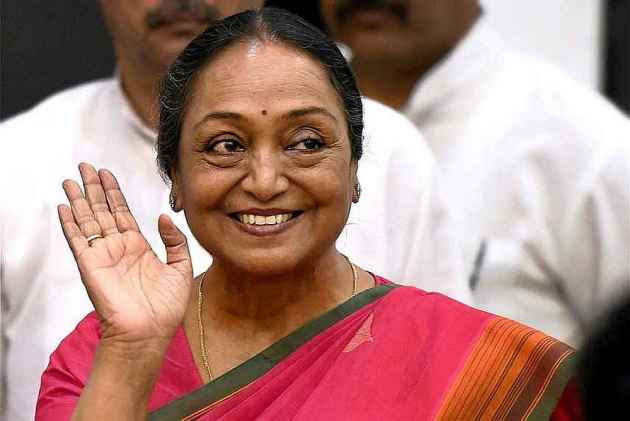 The presidential election is a battle of principles and ideology, opposition candidate Meira Kumar today said and dismissed remarks that she has been made a "scapegoat".

Rounding off her three-day Bihar visit, Kumar asserted that she was fighting for the poor and the downtrodden "whose voice otherwise would have gone unheard".

"Seventeen parties have chosen me unanimously as their candidate for presidential poll which is not a small thing. The opposition unity is based on principles and ideology and I am fighting for its victory," Kumar said at the Congress headquarters in Sadaquat Ashram here.

The Bihar chief minister, who had gone to Rajgir on July 6, has not returned to state capital Patna due to health issues.

With the scales tilted heavily in Kovind's favour, Meira Kumar said, "I have written to all the MPs and members of electorate college to hear voice of their conscience before casting vote."

She described RJD chief Lalu Prasad Yadav as a "hardcore supporter" of forces against communalism. "Laluji is steadfastly standing with the ideology of secularism despite numerous challenges."

Kumar also emphasised her strong roots with Bihar saying the state has always been special to her "because I was born, and got married here".

"The people of the state have always defeated communal forces whenever they rear their head in the country," she said.

"I have made Gandhian ideology the centre of my fight and for this reason I started my campaign from Sabarmati Ashram in Gujarat," she added.