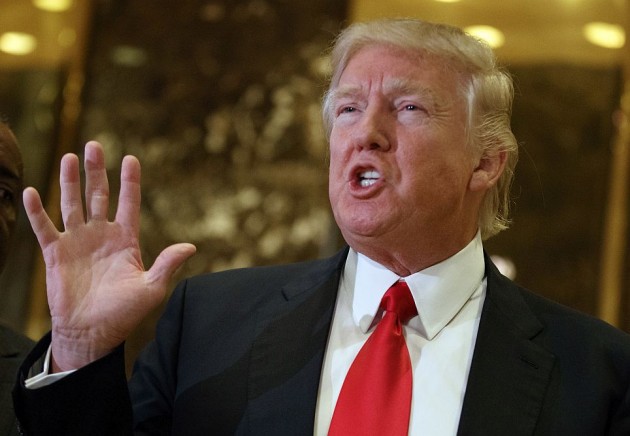 Routine media access to the White House could be a thing of the past under Donald Trump's presidency, with top officials of the incoming administration saying that they're exploring more spacious options nearby.

Vice President-elect Mike Pence cast the idea as a response to increased interest in the new administration, saying they're "giving some consideration to finding a larger venue on the 18 acres in the White House complex to accommodate the extraordinary interest."

Speaking on CBS' "Face the Nation" yesterday, Pence said the move is intended to reflect the Trump administration's "commitment to transparency, to free and independent press."

The news, first reported yesterday by Esquire Magazine, raised alarms that it was just the opposite -- an end to the longstanding tradition of daily press briefings in the White House, a reflection of Trump's contentious relationship with the news media.

More than 250 journalists packed Trump Tower last week for the celebrity businessman's first full-fledged news conference since July, billed as a forum to discuss his separation from his business but which quickly turned into a wide-ranging free-for-all about US intelligence, Russian hacking and, eventually, some of Trump's policy plans after he takes office on Jan 20.

The president-elect's chief of staff, Reince Priebus, echoed Pence's remarks Sunday, saying the news conference demonstrated the need for more space since the briefing room accommodates only about 50 people.

"If we have more people involved instead of less people involved, wouldn't that be a good thing?" Priebus said on ABC's "This Week." He mentioned the idea of moving press conferences to the Executive Office Building next door to the White House. They're currently held in the White House's West Wing, which houses offices for White House staff.

Theodore Roosevelt first created a little area on the White House premises to accommodate journalists so they wouldn't have to wait out in the cold monitoring presidential activity.

Over the years, presidential briefings have relocated a number of times to accommodate interest. They have been held in the president's White House office, the larger Indian Treaty Room in the Executive Office Building and the State Department auditorium, where there was space for the more than 200 reporters covering President John F Kennedy.

The White House Correspondents' Association board said Sunday it "will fight to keep the briefing room and West Wing access to senior administration officials open," in a statement from association president Jeff Mason. He was meeting with incoming Trump Press Secretary Sean Spicer to discuss the matter.

"We object strenuously to any move that would shield the president and his advisers from the scrutiny of an on-site White House press corps," Mason said.