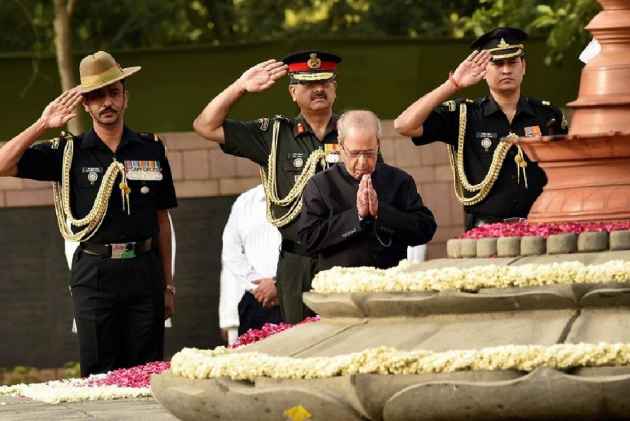 Raising the issue of lynchings in the country in the name of vigilantism, President Pranab Mukherjee today said when mob frenzy becomes so "irrational and uncontrollable", the people have to be "vigilant" to save the basic tenets of the society.

He also urged the intellectual class to rise and be vigilant as it could act as the biggest deterrent to forces of darkness and backwardness.

"When mob frenzy becomes so high, irrational and uncontrollable, we have to pause and reflect. Are you vigilant enough," he said at a function to celebrate 70 years of India's independence.

"I am not talking of vigilantism. I am talking about whether we are vigilant enough proactively to save the basic tenets of our time," he said.

"An active vigilance is the need of the hour," he said.

Former prime minister Manmohan Singh, Congress president Sonia Gandhi and party vice president Rahul Gandhi, besides a host of dignitaries, former ministers, MPs and Congress leaders were present at the event that saw the launch of a commemorative publication on 70 years of India's independence by National Herald.

Mukherjee also said that one cannot obliterate one's duty towards the issue, saying, "Posterity will demand an explanation from us about what we have done. I raise this question within myself."

The president also appealed to the media to remain constantly vigilant saying it is because of it that democracy survives.

"You must rise to preserve and ensure human dignity is maintained, slavery is kept away. You will have to maintain your vigilance," Mukherjee said.

"I do believe that citizen's vigilance, intellectual vigilance and media vigilance can act as the biggest deterrent to the forces of darkness and backwardness," he said.

Mukherjee said as an ordinary citizen of the country, he felt that a gigantic task was achieved by having a country of 1.3 billion people, where 200 languages and dialects are used, all seven major religions of the world are practiced and all three major ethnic groups live unitedly under one Constitution, one flag and in peace and harmony.

"Therefore, we shall have to ponder over, pause and reflect when we read in newspaper or see on the television screen that an individual is being lynched because of some alleged violation of law or not," he said.

Recalling Jawaharlal Nehru's words that "freedom is in peril, defend it with all your might" in 1939, Mukherjee said these words have relevance for all times when freedom is in danger and peril.

"Eternal vigilance is the price of freedom," he said.

He also said that in a world where might was considered right, Mahatma Gandhi told the world that means were as important as the ends.

"Our struggle then was for freedom against oppression from foreign rule. Our struggle today is to defeat the demons of poverty, hunger and disease in line with the transformational characteristics of our Constitution,"he said.

Relaunching the website of the publication that was linked to the freedom struggle, the president said "Today, a soldier and a witness of the Indian freedom struggle has risen again".

He said the publication began its journey during the dark days of colonial times, an era where subjects of the crown refused to accept subjugation as their fate and they aspired to be free citizens of a free land and to be masters of their own fate.

He said for every Indian from that era, aspirations for freedom were not just about a change in political stewardship, but were aimed at creating a new India for every Indian.