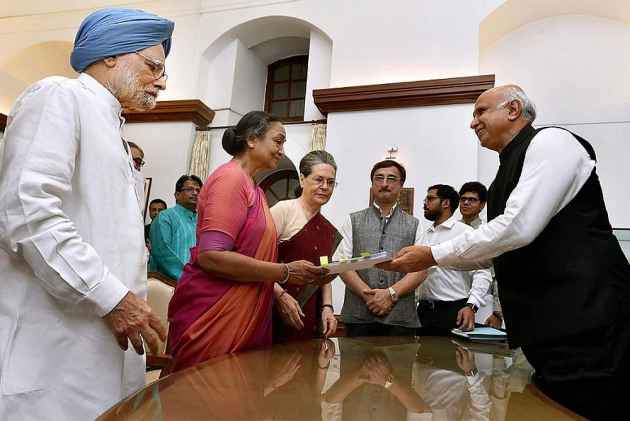 A day before the presidential election, Congress chief Sonia Gandhi today described the electoral contest as a fight against a "narrow-minded, divisive and communal vision".

Addressing opposition leaders in the presence of their presidential and vice presidential nominees - Meira Kumar and Gopal Krishna Gandhi respectively, she said, in these contests, the numbers may be against them but "the battle must be fought and fought hard".

"We cannot and must not let India be hostage to those who wish to impose upon it a narrow-minded, divisive and communal vision," she said.

According to the text of her speech, she said, "We must stand more aware than ever of who we are, what we fought for in our independence struggle and what future we want for ourselves.

"We must have confidence in the values we believe in. This election represents a clash of ideas, a conflict of disparate values. The election demands a vote of conscience to preserve the India that the Mahatma and that illustrious generation of freedom fighters, joined by thousands upon thousands of ordinary men and women, fought for," she said.

She said the presence of representatives from different parties to support Kumar and Gopal Gandhi confirms that "the fight for an inclusive, tolerant and pluralistic India is being truly waged".

The vice presidential poll will be held on August 5.