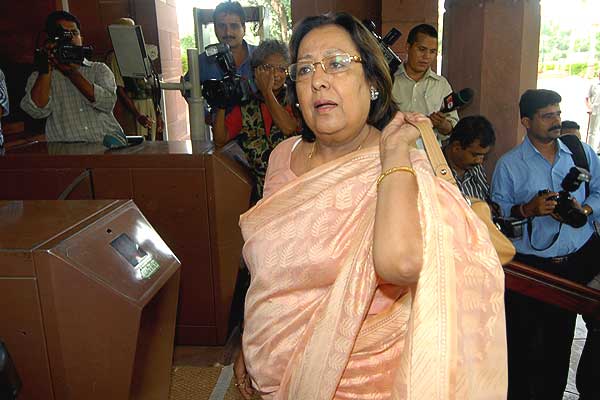 Minority Affairs Minister Najma Heptulla, who had crossed 75 years, resigned today from the Union Cabinet along with Minister of State for Heavy Industries G M Siddeshwara.

Announcing their resignations, a Rashtrapati Bhawan communique said these have been accepted.

There was speculation last week when Prime Minister Narendra Modi undertook the reshuffle that Heptulla and Minister of Small and Medium Enterprises Kalraj Mishra, who had recently turned 75, could be asked to quit.

Modi is believed to have set an age bar of 75 years for ministers and had kept veterans like L K Advani and Murli Manohar Joshi out of the Cabinet and co-opted them in 'Margdarshak Mandal'.

The Rashtrapati Bhawan communique said Mukhtar Abbas Naqvi, who was Heptulla's deputy, has been assigned the Independent charge of the Ministry of Minority Affairs.

According to government sources, Heptulla (76) was out of country and therefore could not submit her resignation on July 5 though she had decided to do so.

G M Siddeshwara (64), Minister of State of Heavy Industries and Public Enterprises, too was out of Delhi and could not submit his resignation on July 5, sources said, adding today on return of the Prime Minister from abroad, they submitted their resignations, which have been accepted.

Siddeshwara, a Lok Sabha member from Karnataka, is believed to be among those who were asked to resign in the reshuffle on July 5 but he, sources said, had sought more time due to his birthday on the same day.

Babul Supriyo has been relieved of his existing portfolios as Minister of State for Urban Development and also Housing and Urban Poverty Alleviation.

He has been assigned the portfolio of Minister of State in the Ministry of Heavy Industries and Public Enterprises.

While Heptulla has resigned, Mishra remains in the Cabinet despite crossing 75 years. It is believed that he has been retained considering the crucial Uttar Pradesh Assembly polls early next year as he is noted Brahmin leader from the state.

Siddeshwara said he had resigned "happily", adding he got little time as a minister to serve his constituency.

"I have resigned happily. I am very very thankful that my resignation has been accepted. I would not get time to work for my constituency. In the next three years I can work in my constituency with the help of everybody," he said.

Supriyo, whose portfolio has been changed, said, "It is a challenging role. I thank the PM for trusting me. Whatever role he gives me, I will take it."