Pranab Da Cared For Me Like A Father Would: Emotional PM Modi On President 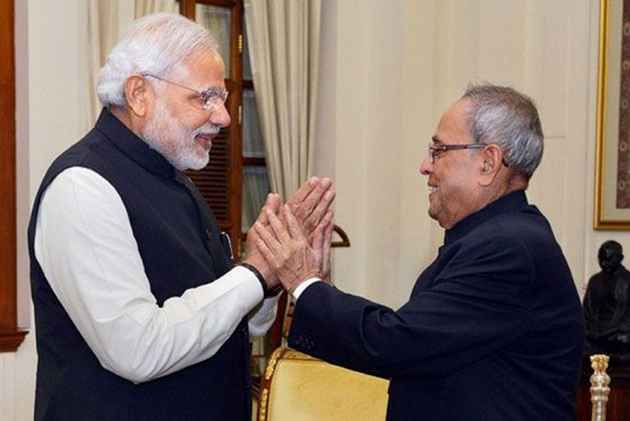 Print
A
A
A
increase text size
Outlook July 03, 2017 09:14 IST Pranab Da Cared For Me Like A Father Would: Emotional PM Modi On President

Days before Pranab Mukherjee demits office, Prime Minister Narendra Modi on Sunday voiced his deep admiration and emotional bonding with the outgoing President, saying he cared for him like a father would for his son.

Releasing a book, President Pranab Mukherjee–A Statesman, at the Rashtrapati Bhawan, Modi said he was fortunate that he could hold Mukherjee's hand while trying to settle in Delhi, and that there was never a meeting between them in the last three years when the president did not treat him like a son.

"I am saying this from deep within. Like a father caring for his son...," he said turning emotional.

"Modi ji, you will have to rest for half day, Pranab da would say. 'Why are you running around so much; you must cut down on your programmes. You will have to take care of your health.'

"It was during the UP polls that he told me that win and loss happen all the time but will you take care of your body or not? It was not part of his responsibilities as the president but it was the humane person inside him which cared for a friend," the prime minister said.

Mukherjee is an inspirational figure, he said as he recalled his association with people from different walks of life who made an impact on him.

Mukherjee, too, expressed his "deep gratitude and appreciation" for Modi.

There has been divergence of views but the two kept those to themselves and acted in close cooperation.

"It did not affect the relationship between the president and the prime minister, between the titular head and the actual head of the administration," Mukherjee said.

Mukherjee said at times he would seek clarifications from Finance Minister Arun Jaitley, who was present on the occasion and has often articulated the government's position on various issues, and Jaitley often convinced him like an "able and effective advocate" that he is.

The President said he can claim with confidence that "the functioning of the government was never disturbed, never stopped, never delayed".

Talking of himself, Modi said he was a kind of person who was always worried what he would do in the evening if his work got finished early.

The book- a photo essay brought out by the Statesman group- he said it would spotlight the humane aspect of the president who is often seen by people as somebody always driven by protocol.

People would know through photographs that their president laughs like a child.

"They will also see the self-confidence of our president in front of foreign dignitaries, however big in size they may be," he said in a lighter vein, praising Mukherjee, a man of short height.

Lauding the idea behind the book, Modi also lamented that as a country India was not "history conscious".

He said the Portuguese government agreed to India's long request of giving it a copy of its correspondence related to Goa, once its colony, during his recent visit to the country.

Nobody preserved the correspondence here, he said.

If an Indian scholar has to do some research today, he often has to go to the UK to look for material as it is not in our nature to preserve them, he said.

Chronicling events is very important for understanding a nation's history, he said.