Ponting Slams Sachin for His Role in Monkeygate Row 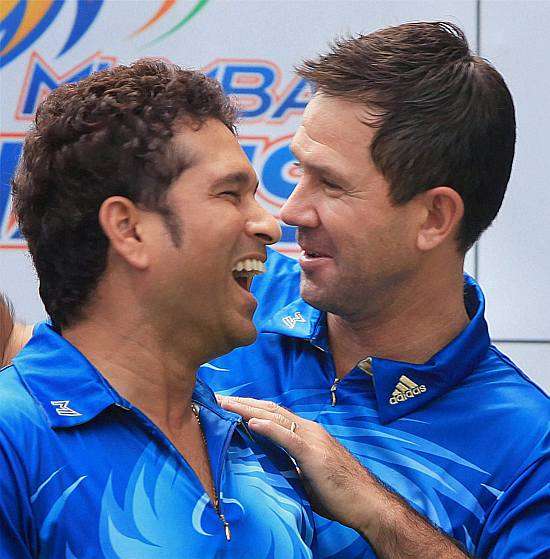 Print
A
A
A
increase text size
Outlook October 17, 2013 19:42 IST Ponting Slams Sachin for His Role in Monkeygate Row

The ghost of 'Monkeygate' has risen again with former Australian captain Ricky Ponting questioning Sachin Tendulkar's role in the scandal, claiming that he was taken aback by the senior Indian batsman's statement which saved Harbhajan Singh.

Singh was accused of calling Aussie all-rounder Andrew Symonds a monkey during the 2008 Sydney Test and was suspended for three Tests. But he was cleared in an appeal hearing, conducted by Justice John Hansen from New Zealand, in which Tendulkar appeared as a witness and gave a statement in favour of the Indian.

In his memoirs -- titled The Close of Play -- Ponting said he didn't understand why Tendulkar vouched for Singh during the appeal hearing but did not say anything when match referee Mike Procter initially suspended the spinner for passing allegedly racial comments at Symonds.

"I couldn't understand why Sachin didn't tell this to (match referee) Mike Procter in the first place," Ponting, captain of Australia at that time, wrote on the role of Tendulkar, who will retire from the game after his 200th Test next month.

Ponting is not the first cricketer to question Tendulkar's role in the scandal as retired wicket-keeper Adam Gilchrist had taken a similar view in his autobiography five years ago.

The Herald Sun's Malcom Conn has also written in a column titled 'Sachin's Sin City' earlier that the scandal will forever haunt tendulkar. "...despite the unparalleled greatness of his achievements, some Australians lost respect for him when he gave completely different accounts of what took place as a key witness in the Harbhajan Singh-Andrew Symonds racism meltdown," he claimed.

Ponting, in his recollection of the drama that unfolded, said he found it absurd when Harbhajan was merely fined after the incident which threatened to hurt the relations between the two countries.

"Owing to an administrative error, the judge was never told about any of Harbhajan's past offences, which meant the penalty was way less than what it should have been," Ponting was quoted as saying in excerpts published by a newspaper.

"As I pondered this result over the weeks and months that followed, I started to think that I needed to be more savvy about the off-field politics", Ponting wrote.

"Maybe the Indian cricket juggernaut of the 21st century is too influential to shake. But then I thought about the way a number of people in the game had questioned our motives; how they thought we were just seeking an advantage rather than acting on principle," he added.