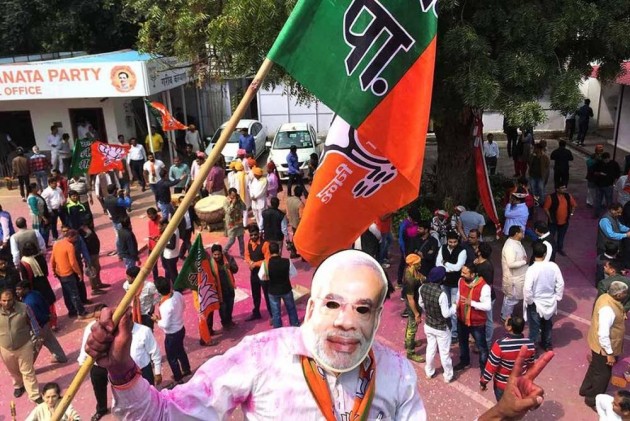 Print
A
A
A
increase text size
Outlook March 12, 2017 19:29 IST Political Analysts Say BJP's March To Tamil Nadu Or Kerala May Have To Wait For Some Years

The thumping victory in Uttar Pradesh would embolden the BJP to spread its wings in southern states though it may have to wait for some years to have a say in states like Tamil Nadu or Kerala, according to political analysts.

Political scientist Sandeep Shastri today said Karnataka would be the corridor of power for BJP in the south, while fellow scientist at Himachal Pradesh University Ramesh Chauhan said barring Karnataka the Uttar Pradesh results will not have any positive impact in the south for the party.

"The humongous victory of BJP in Uttar Pradesh will embolden the saffron party to spread its wing down south, but not before reclaiming power in Karnataka, which is a corridor of power for BJP," Shastri told PTI here.

The BJP stormed to power in Uttar Pradesh after 14 years, securing 312 seats in 403-member assembly and demolishing rivals SP-Congress and BSP in the assembly polls.

On next year's assembly elections in Karnataka, he said BJP might not project a chief ministerial candidate and instead adopt a strategy as it did in Uttar Pradesh and Uttarakhand and press the central leadership including Prime Minister Narendra Modi to lead poll campaigns.

Asked how he sees the growth scalability of the BJP in southern states after reclaiming power in Karnataka, Shastri said the saffron party would try to dislodge the Congress in Kerala and piggy back with one of the AIADMK factions.

"In the long run, the BJP would like to dislodge Congress in Kerala and become an alternative party in direct contention with the Left, and in Tamil Nadu, it will like to ride piggyback with one of the AIADMK factions," he said.

Shastri said the BJP would continue to make good strides in Kerala.

Chauhan said BJP would have to wait for another three to four years in Tamil Nadu and Kerala.

"Except Karnataka, I don't think the UP results will have any bearing on Tamil Nadu and Kerala for another three to four years. In Tamil Nadu, the regional parties are too strong for BJP to make any roads for now," he said.

"However, the party has made some presence in Kerala in terms of percentage of votes - about 15 per cent vote," he said.