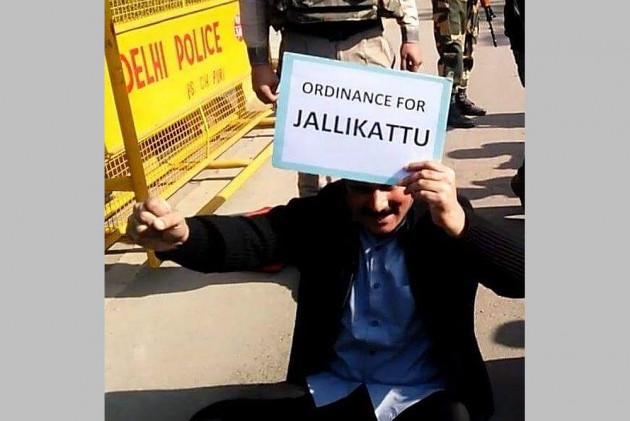 Upping ante over Centre to come out with an ordinance lifting ban on bull-taming sport 'Jallikattu' in Tamil Nadu, PMK leader Anbumani Ramadoss today staged dharna (sit-in) outside the Prime Minister's residence here, seeking promulgation of the legislation before January 26.

Speaking to reporters, former Union Health Minister Ramadoss also warned that his party men will go ahead with conducting the event in case the Centre failed to pass the ordinance before Republic Day and also cautioned that violent protest may follow if the demand was not met with.

The Dharmapuri Parliamentarian also criticised Tamil Nadu's ruling AIADMK and Chief Minister O Panneerselvam for meeting Prime Minister Narendra Modi without taking leaders of other political parties along to put across the state's case in the matter unitedly.

"The Centre should promulgate an ordinance lifting ban on Jallikattu. If the ordinance is not passed before Republic Day, our party cadre will conduct Jallikattu in parts of the state (violating the ban)," he told reporters.

Stating the protests over banning the event have been "peaceful" until now, the leader insisted Centre to promulgate the legislation to "avoid law and order issues" in the southern state.

He also suggested removing problems, if there are any, in holding the event than imposing ban on the sport.

Hitting out at the AIADMK for meeting the Prime Minister separately, Ramadoss asked the ruling party to take cue from how political parties in Karnataka and Kerala come together keeping aside differences on issues of interests of the states.

"I am also ready to resign from my post of MP, if it helps in holding Jallikattu," the Pattali Makkal Katchi (PMK) leader added and sought the Prime Minister's appointment to flag issues concerned.

Ramadoss was taken away by police some minutes after he did sit-in at the Prime Minister's residence along 7 Lok Kalyan Marg.

The protest by Ramadoss followed a meeting between Modi and Panneerselvam. Following the meeting, the Chief Minister said the Tamil Nadu government will soon take steps for holding banned Jallikattu event with the backing of the Centre.