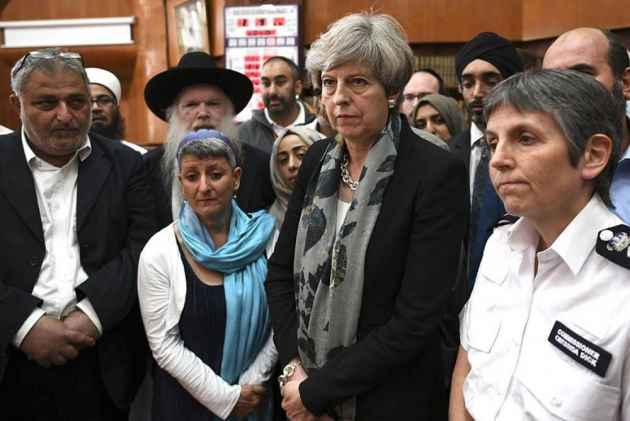 Print
A
A
A
increase text size
Outlook June 23, 2017 15:41 IST PM Theresa May Promises To Let EU Citizens Stay In UK After Brexit

Prime Minister Theresa May, known for her hardline stance on Brexit, has offered a sop to UK- based EU citizens by promising to allow them to stay in Britain after the country's exit from the economic bloc.

The announcement at a Brussels summit yesterday will come as a relief to an estimated 3 million EU nationals living permanently in the UK, including over 20,000 Goans who had used their Portuguese heritage to apply for EU nationality.

Addressing EU leaders at her first summit since the snap general election that lost her a majority in the UK Parliament, May said she did not want anyone to have to leave or families to split up.

"No one will face a cliff edge," she said, softening her stance after her disastrous election gamble.

"The UK's position represents a fair and serious offer, one aimed at giving as much certainty as possible to citizens who have settled in the UK, building careers and lives and contributing so much to our society," she said.

The British prime minister stressed that her government wanted to protect the rights of EU citizens in the UK - and the rights of UK expats in other European countries.

Downing Street is yet to specify what the cut-off date will be for new residents, after which the special UK settled guarantee would no longer apply.

It will be no earlier than March 2017, when the UK formally began leaving the EU by issuing the Article 50 notification, and no later than March 2019 when it will actually leave.

Those arriving up until the point of departure would have a "grace period" - expected to be two years - to build up the same "UK settled status" and the system would also be streamlined, doing away with an 85-page permanent residency application form which has attracted complaints, May said in a clear attempt to sweeten Britain's offering for Brexit.

She told EU leaders: “The commitment that we make to EU citizens will be enshrined in UK law and will be enforced through our highly respected courts.”

The British offer stands only on the basis that a reciprocal one is made for UK citizens living in EU countries, Downing Street has indicated.

The proposals will form the central feature of further talks at the ongoing summit in Brussels today.