PM Pitches for One Lakh Cr Investment for Port Development 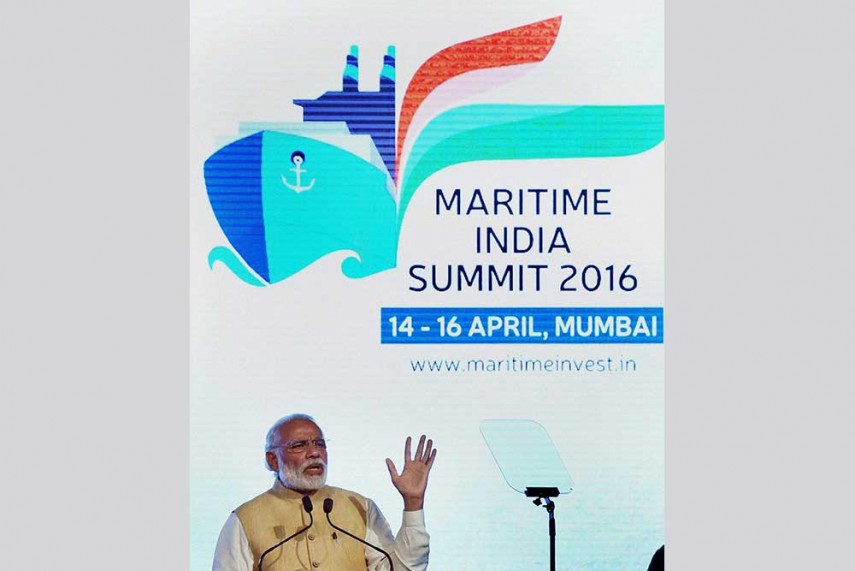 Print
A
A
A
increase text size
Outlook April 14, 2016 13:08 IST PM Pitches for One Lakh Cr Investment for Port Development

Modi said the government plans to more than double port capacity to 3 billion tons by 2025 and "wants to mobilise an investment of Rs 1 lakh crore in the port sector to enable this growth."

"This is the right time to come to India. It is even better to come through the sea route. The Indian ship is well equipped for a long haul. Don't miss it. Missing it means missing a pleasant journey and a great destination," he said in his inaugural address at the Maritime India Summit here.

Listing out reform measures taken in port and shipping sector since his government came to power in May 2014, he said, "This is just the beginning. We want to do more."

"We are enhancing our own capacities of execution and implementation," he said adding five new ports are planned to meet the increasing demand of trade which will rise in proportion with the fast-growing Indian economy.

New ports are also being developed by several coastal states, he said.

"During the last two years, major ports have awarded 56 new projects involving an investment of more than 250 billion rupees. This will create an additional port capacity of 317 million tonnes per annum.

"Our vision is to increase port capacity from 1400 million tonnes to 3000 million tonnes by 2025. We want to mobilise an investment of one lakh crore, or one trillion rupees, in the Port Sector to enable this growth," he said.

Stating that India has had a glorious maritime history, he said government was on the path of shaping an even better maritime future.

"Once you are here, I assure you that I will personally hold your hands to see that your berthing is safe, secure and satisfactory," he told investors.

With a GDP growth rate of more than 7 per cent, India is the fastest growing major economy today, the Prime Minister said, adding the government was taking aggressive steps to ensure that "process of growth is both fast as well as inclusive."

Stating that India's vast coastline of 7,500 kilometers offers a huge investment opportunity, he called upon the global business community to partner with the country to give shape to process of port-led development.

"I am sure, the long coastline of India along with diverse coastal regions and hard-working coastal communities can become an engine of growth of India," he said.

Listing reforms undertaken in the sector, he said cross border trade has been simplified and licensing regimes liberalised.

Also, almost 60 per cent of the defence items has been taken out of the licensing process and most of the FDI sectors are now put on automatic approval route.

Shipyards are being given infrastructure status at par with the ports and rebate of service tax on coastal shipping has been increased to 70 per cent. Also, customs duty and central excise exemption on inputs used in ship building has been granted.

While a scheme of financial assistance to promote shipbuilding has been approved, customs and central excise duties have been exempted on bunker fuel for Indian flagged container ships.

Tax issues of seafarers have been resolved, he said.

The traffic in major ports has shown a healthy growth of more than 4 per cent in the last two years, despite global slowdown, he said.

Modi said no country can achieve the desired results in the maritime sector in isolation. "Nations have to collaborate to realise this potential and to overcome challenges."

The Sagarmala programme, he said, is aimed at leveraging India's long coastline and natural maritime advantages.

"It also focuses on promoting port-led development, energising the coastal economy and infrastructure development in these areas. We particularly want to modernise our ports and integrate them with Special Economic Zones, port based smart cities, industrial parks, warehouses, logistics parks and transport corridors," he said.

Stating that India was engaging with its immediate and regional neighbours to promote shipping and maritime security, Modi said New Delhi has signed a Coastal Shipping Agreement with Bangladesh and is also engaged in the development of Chahbahar Port in Iran.

"A special purpose vehicle by the name India Ports Global Limited has been established to take up maritime projects overseas," he said.

The multiple measures to promote coastal shipping coupled with the anticipated rise in domestic production of coal, is expected to enhance coastal transportation of coal by at least four-folds by 2025, he said.

The Prime Minister said about 250 projects with investment opportunity in the maritime sector are available for investing.

The projects include infrastructure development in 12 major ports and those in eight maritime states.

"Of these, over 100 projects have been identified under the Sagarmala Programme. With more than 14,000 kilometers of navigable inland waterways in the country, there is tremendous potential for development in this sector.

"My Government is committed to integration in infrastructure. We are also committed to creating an enabling environment for investors and to facilitate investments with an open mind," he said.

Modi said about 18 per cent of India's population lives in 72 coastal districts and so there was a need for holistic and sustainable development of coastal regions and communities.

"These initiatives will create employment opportunities of approximately ten million jobs over the next ten years. This includes four million direct and six million indirect jobs," he said, adding to broaden livelihood opportunities further, modern and sophisticated fishing vessels will be deployed.

Stating that the PPP model of development has been quite successful in the sector, he said private ports handle around 45 per cent of the total cargo.

Modi said oceans contain 99 per cent of the living space on the planet and human "lifestyle, transport systems and trading behaviour should not spoil the ecology of the oceans."

"Also, maritime security, freedom of navigation and safety and security of sea lanes is equally important," he said.

He said the challenges of climate change have shown that even offshore human behaviour can change the ecology of glaciers and oceans. "This is already causing a lot of concern for island countries and coastal communities in particular."