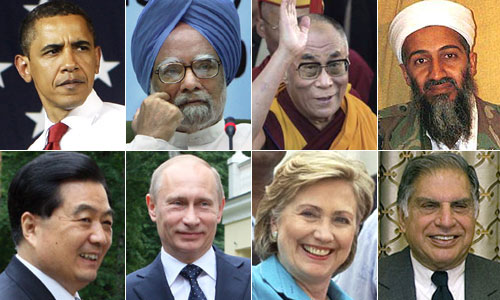 outlookindia.com
-0001-11-30T00:00:00+0553
Four Indians, including Prime Minister Manmohan Singh and fugitive Dawood Ibrahim, have made it to the Forbes list of the world's most powerful people topped by US president Barack Obama.

Dawood, head of the infamous 'D-Company', is wanted by India in connection with the 1993 serial blasts in Mumbai and has been listed by the US as 'Specially Designated Global Terrorist' for funding al-Qaeda.

Osama Bin Laden, the mastermind of 9/11 terror strike on US, too has been eluding US-led multi-national armed forces.

The Forbes ranking includes total 67 persons from across the world. Among the top-ranked, Obama, Jintao and Putin are followed by US Federal Reserve Chairman Ben Bernanke (4th) and internet giant Google founders Sergey Brin and Larry Page joint fifth.

Steel baron and non-resident Indian Lakshmi Mittal has also found a place on the list of Most Powerful People in the world.

Mittal, who heads the world largest steel company ArcelorMittal, has been placed 55th on the list.

The magazine took into consideration four dimensions of power for compiling its first ranking of the World's Most Powerful People.

It covered areas like influence of the person over lots of other people, whether they control relatively large financial resources compared with their peers and are they powerful in multiple spheres.

"There are only 67 slots on our list--one for every 100 million people on the planet--so being powerful in just one area is not enough to guarantee a spot," Forbes stated.

"Our picks project their influence in myriad ways. Take Italy's colourful prime minister, Silvio Berlusconi (ranked 12), who is a politician, a media monopolist and owner of soccer powerhourse AC Milan, or Oprah Winfrey (45th place) who can manufacture a best-seller and an American President," it added.