PM Must Release List of Black Money Hoarders, Majority Would Be of Those Who Garland Him: Anand Sharma in RS 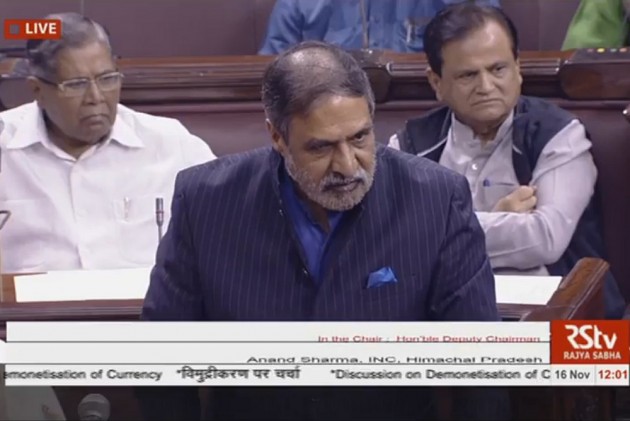 Print
A
A
A
increase text size
Outlook November 16, 2016 11:56 IST PM Must Release List of Black Money Hoarders, Majority Would Be of Those Who Garland Him: Anand Sharma in RS

Congress leader Anand Sharma tried to corner the BJP in the Rajya Sabha on the first day of the winter session of the Parliament. He demanded the Prime Minister to name all those who hoard blackmoney because most probably the majority would be of those who garland the Prime Minister.

He also slammed the government for its lack of preparedness in its plan to demonetise Rs 500 and Rs 1000 notes.

He called the new 2000 rupees notes like those that he used to find as a child in packets of chooran.

He also said that the Prime Minister should apologise for insulting those standing in lines outside banks and ATMs.

He blamed the Prime Minister for not keeping demonetisation a secret and for selectively leaking the news.

Slamming the move to demonetise, Sharma said that the move has given a message to the world that the entire Indian economy is standing on blackmoney.

"It's an agrarian economy. The farmer who sells his ware in the market he gets paid in cash but is that blackmoney?

The daily labour is standing in a queue for the last one week.

Which farmer carries a credit card in his dhoti? Or a cheque book? How can you go cashless. Which country in the world is a cash less economy?

Which terrorist goes to the bank with a sack of counterfeit money and asks for it to be exchanged?"

Piyush Goyal presented a rebuttal to Anand Sharma's criticism of the demonetisation move: "Anand Sharma is very good at poetry but is perhaps weak at Arthashastra. Some people are bound to get worried because this move has harmed their interests. It is for the first time that the honest citizen has been honoured."

He said that if the economy of India becomes honest, if people pay their taxes honestly, then the state governments will be able to work for the upliftment of poople.

Goyal said that there was no politics in demonetisation, it was done etirely in the interest of the nation.

Samajwadi Party leader Ram Gopal Yadav said that the public did not face such inconvenience even during the Emergency.  "10-12% have most of the country's wealth. How many of those people are in the queues outside the bank?" , asked Yadav.

CPI-M leader Sitaram Yechury held up a Rs 2000 note and said that no one wants to take it because it would mean giving back a lot of change.

Yadav said that this is the easiest time for people to circulate counterfeit notes because people are in need of money and unfamiliar with the new notes.

The House was adjourned till 2 PM.