PM Modi Must Apologise To The Nation At The End Of The 50-Day Period, Says Congress 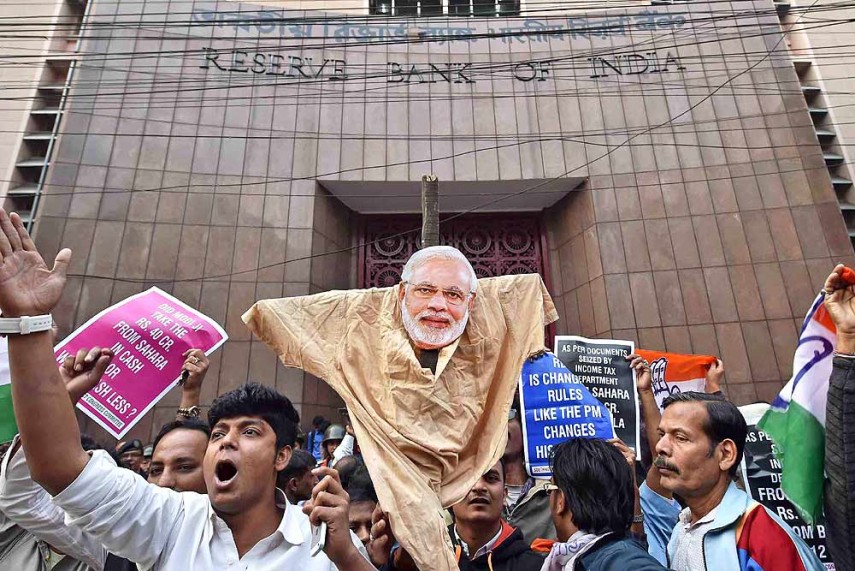 Print
A
A
A
increase text size
Outlook December 29, 2016 14:59 IST PM Modi Must Apologise To The Nation At The End Of The 50-Day Period, Says Congress

Congress today demanded that Prime Minister Narendra Modi apologise to the nation for the "suffering" caused to the people by note-ban when he speaks on New Year's eve and vowed to hold country-wide protests from January 6.

Attacking Modi, who is set to address the nation after end of the 50-day period he had sought from the people to ease their problems due to cash crunch, Congress' chief spokesperson Randeep Surjewala said that the Prime Minister is good at making announcements that are far from reality.

"Even after 50 days of demonetisation step, normalcy has not been restored.

"PM Modi's demonetisation move has turned out to be 'Deshbandi' (lockdown of country). Development has come to a standstill. It is a scam and an uncalled move. It has resulted into economic instability in the country. Several people have died due to cash crunch across the country. It is a surgical strike on the country's poor and has caused them immense suffering," Surjewala said at a press conference in Jaipur.

He claimed that note ban has led to 115 deaths in last 50 days, RBI has changed its rules 126 times and it will take eight months to print the equivalent currency notes.

"Starting from January 6, we will continuously hold protests across the country against demonetisation. We demand compensation for aggrieved family members, income and sales tax rebate to traders and common man," he said.

Congress leader Meem Afzal said the Prime Minister "has so far not had a word of sympathy for the victims, forget about an apology".

"But we expect him to apologise when he speaks on the issue at the end of the 50 days he had sought," he told reporters in Srinagar.

"Prime Minister Narendra Modi promised to create two crore new jobs every year but only 1.5 lakh jobs have been created in two and half years. After announcing demonetisation last month, at least 10 crore people have been rendered jobless," he claimed.

Afzal claimed as many as 11 crore man-hours were spent every day in queues outside banks and ATMs as people struggled to withdraw their own money.

"Money was taken from people's pockets and put in the banks. 130 crore people of the country were made to queue up for their money. The time people should have spent earning their livelihood was spent in the queues," he said.

He said the Congress party demands an apology from the Prime Minister to the nation for these deaths and also compensation to the next of kin of the victims.

Afzal said the Congress party also demands that 18 per cent interest be paid to the people on the money they have deposited in the banks.

Alleging that some BJP leaders have been caught with stashes of new currency notes, Surjewala demanded a high-level inquiry.

"Ordinary people are standing in bank lines to withdraw money, but a parallel black market flourishes in converting black money into white by charging commission up to 30 per cent commission," he alleged.

Surjewala also said that PM's credibility is under cloud as his named has allegedly surfaced in Birla and Sahara dairies for receiving kickbacks when he was the Gujarat Chief Minister. BJP has rejected these charges, terming them as false, baseless and malafide.