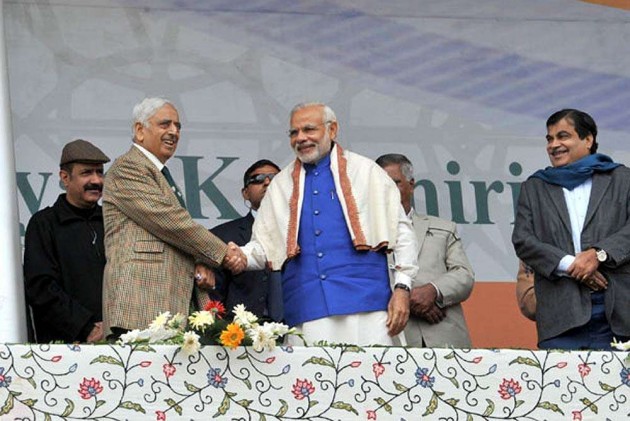 In a bid to reach out to people of Jammu and Kashmir, Prime Minister Narendra Modi today invoked Atal Bihari Vajpayee and announced a Rs 80,000 crore package saying funds would not be a constraint in building a modern, progressive and prosperous state.

Recalling the words of the former Prime Minister-- "Kashmiriyat, Jamhooriyat aur Insaniyat' (Kashmiri culture, democracy, and humanity), he said, "I will like to follow these three mantras which are the pillars of development of Kashmir".

Addressing a public meeting at the heavily-guarded Sher-e-Kashmir cricket stadium, the Prime Minister did not make any reference to the stalled dialogue process with Pakistan or initiating a talks with separatists as was widely expected by his alliance partner PDP and rivals.

"I don't need advice or analysis from anyone in this world on Kashmir. The three mantras of Atalji and these will be helpful in moving forward. Kashmiriyat ke bina Hindustan adhura hai. (Without Kashmiriyat, India is incomplete). Sufi tradition has emerged from this land and this tradition has taught us oneness and strength of unity," he said.

Reacting to his speech, former Chief Minister Omar Abdullah said Modi invoked Vajpayee used the Srinagar platform in a difficult situation to reach out to Pakistan and start a dialogue process with the Hurriyat Conference.

"...In front of him (PM), Mufti Mohammad Sayeed talked about starting dialogue. The Prime Minister did not listen to Mufti Sahib. What is Mufti Sahib doing when his words did not stand for few minutes? Where is the agenda of alliance (of PDP and BJP)?" he told reporters.

In his second public meeting in Kashmir after becoming the Prime Minister, Modi announced the package and said that this is not a full stop as "our hearts are also open for you".

"The Centre announces Rs 80,000 crore package to the state. It's my heart-felt desire that this money will be helpful in turning your fate. This money should be used for converting the state into a new Jammu and Kashmir which is modern, prosperous and progressive state.

"This is not a full stop. This Rs 80,000 crore is not a full stop. It's rather a beginning...Dilli ka khazana aap ke liye hai, Dilli ka khazana hee nahi, dil bhi aap ke liye hazir hai (The treasury is for you. Not only our treasury, but our heart also beats for you)," said Modi, who was flanked by Chief Minister Mufti Mohammed Sayeed, Union Minister Nitin Gadkari and Jitendra Singh and PDP President Mehbooba Mufti.

"The dreams of two generations have been lost in last two decades. But I am an optimist and would like to move ahead and covert Jammu and Kashmir into a modern and developed state," he said.

The Prime Minister said that the youth of the state needed employment and assured the Mufti Sayeed-led PDP-BJP government that the Centre was standing rock solid behind it in its endeavour to restore normalcy in the state.

"We may touch any heights in economy and technology. And no matter how much the life changes, we may even build a castle in the air, but it is only our soul that inspires us to respect the dignity of self and others," he said.

In Jammu, he inaugurated the phase-II of the Baglihar power project at Chanderkote and laid foundation stone of four-laning of Udhampur-Ramban (40 KM) and Ramban-Banihal (32 KM) sections of Jammu-Srinagar national highway.

While inaugurating, he said Modi today said "honourable" rehabilitation of the West Pakistan refugees and Kashmiri pandits who migrated from the Valley is the most important task for his government.

"There are lakhs for refugees since 1947 here...And about 15-20 per cent population of the state is displaced. This is not a small pain but a huge distress. It is high time that the 1947 refugees and displaced Kashmiri Pandits are provided an honourable come back to home.

There are nearly 55,000 refugee families who came from West Pakistan in 1947. They have not been given any state subject thereby restricting them from purchasing land and government jobs in the state. However, the NDA government has already made a concession of adjusting youths of these families in central para-military forces.

The number of Kashmiri pandit families is around 59,000 who had to leave the Valley in 1990 in the wake of militancy.

The Prime Minister said the state had potential for adventure tourism, eco tourism and leisure tourism to attract visitors from across the world.

Modi said there was no reason that Kashmiri cannot emerge from its troubled past as "I believe that crisis, however, deep it might be, can be over come with determination".

"Kashmir has seen a lot of crisis over the past 20 years. Dreams of two generations have been shattered. I have set out to make Kashmir paradise on earth again, to make it prosperous. I have belief in Mufti Sahib.... I have belief in you. Otherwise, we would not see such an atmosphere (at the rally)," he added.