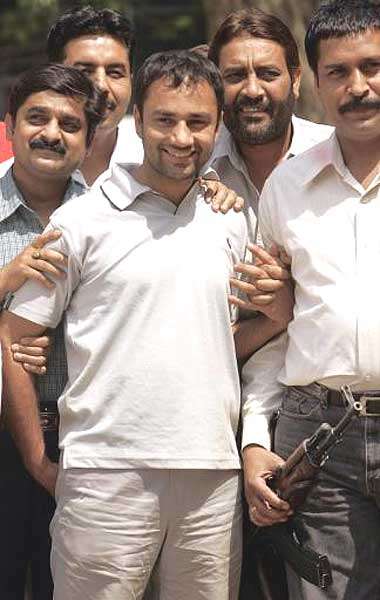 Sher Singh Rana, the lone convict in the sensational murder of bandit-turned-Lok Sabha member Phoolan Devi here in 2001, was today awarded life term by a Delhi court which said death penalty was not warranted as his act cannot be termed as an attack on Parliament and does not fall under rarest of rare category.

Additional Sessions Judge Bharat Parashar also observed in his 13-page order on sentence that awarding death penalty to 35-year-old Rana would be "completely disproportionate" to the crime committed by him.

"The fact however remains that the act of convict Sher Singh Rana cannot be termed as an attack on a democratic institution of the country viz the Parliament," the court, which also imposed a fine of Rs one lakh on Rana, said.

"I am thus of the considered opinion that awarding of death penalty (to Rana) would be completely disproportionate to the crime committed in the present case," the judge said.

Pronouncing the order in a jampacked courtroom, the judge noted that Rana has already spent about 11 years in jail during the "long protracted criminal trial" in the case which lasted for more than 13 years.

It observed that facts of the case does not fall into the category of rarest of rare warranting death penalty as motive behind the murder could not be established by the police.

"However, in my considered opinion the facts of the present case does not fall into any of the aforesaid categories even if the matter is considered from a "Society Centric" approach.

Soon after the pronouncement of life sentence, the family members of Phoolan as well as Rana said they would challenge the judgement before a higher court.

"My brother Sher Singh Rana is innocent. Phoolan killed so many innocent people. She surrendered but later she became a Member of Parliament. Even if Rana has murdered Phoolan, he has done no wrong as she was a 'dacoit'," Rana's sister, Shikha Singh Rana, told reporters.

Rana's younger brother Vijay Singh Rana, who was also an accused in the case and was acquitted by the court due to lack of evidence, told the scribes that he cannot comment on the verdict but they will file an appeal against it soon.

The verdict was delivered amid tight security inside and outside the Patiala House Court premises with policemen making a human chain while escorting Rana to the courtroom from the lockup.

The kin and supporters of Rana and Phoolan too exchanged heated words outside the courtroom as well as the court premises.

In its 13-page order, the court observed there must be a proportion between the offences committed by the accused and the punishment rendered out to him but it can not be followed mathematically.

"However, at the same time it must be kept in mind that the principle of there being a proportion between punishment and offences ought not to be so mathematically followed up as to render the laws subtle, complicated and obscured. Brevity and simplicity are a superior good," it said.

"Something of exact proportion may also be sacrificed to render the punishment more striking, more fit to inspire the people with a sentiment of aversion for those vices which prepare the way for crime," the court said.

Referring to Rana's escape from Tihar jail for a period of about two years while being in judicial custody during the trial, the court said this was a factor which goes against him but there was no complaint regarding his behaviour with other inmates or prison authorities.

"However during the period when convict (Rana) remained in jail no complaint regarding his behaviour qua other inmates or other jail authorities have been reported. He has an old aged mother and his father expired during the pendency of the present trial," the court said.

Dealing with the submissions of prosecution seeking death penalty for Rana, the court observed that although motive and manner of committing a crime and its impact on the society were relevant factors but in this case, the police had failed to establish the convict's motive behind murdering Phoolan.

"However, as I have already discussed in detail in the judgment dated August 8, 2014 while holding Sher Singh Rana guilty that prosecution failed to prove the motive which probably prompted Sher Singh Rana to commit the crime in question. Thus the said aspect of the prosecution case can not be taken into consideration atleast against the convict," it said.

The court also noted that Rana was either acquitted or discharged in various cases lodged against him earlier and the "past criminal antecedents of the convict also does not stand proved against him".

It cannot be said that Phoolan was killed because she was an MP or Rana wanted to avenge the killing of 22 'Thakurs' by her in the ill-famous Behmai massacre, the judge observed.

"It was altogether a different matter that Phoolan Devi happened to be a Member of Parliament. Similarly Balender (her personal security officer) was not attacked simply because he was a police official but because he used to accompany Phoolan Devi at all times and the special PP may be right that the assailants either wanted to kill him or to maim him so that he may not depose against them in the Court of Law," it said.

On the contentions of Rana's counsel that Phoolan was sentenced to jail for about 11 years for killing 22 Thakurs and thus a lenient sentence should be imposed on his client, the court said, "This argument deserves to be rejected outrightly being completely vague and does not even require a discussion."

It also said that Rana's young age and his incarceration for a period of around 11 years during the trial were in his favour and awarding death penalty to him would be completely disproportionate.

"However, keeping in view the overall facts and circumstances of the case when the incident resulted not only in the murder of Phoolan Devi but grievous and serious injuries were also caused to Balender, so I am of the considered opinion that the interest of justice will be suitably met if convict Sher Singh Rana is sentenced as follows....," the court said while awarding life term to him.

The court also said that if Rana failed to deposit the Rs one lakh penalty imposed on him, he will have to undergo six months imprisonment in default.

37-year-old Phoolan, then a Samajwadi Party MP from Mirzapur constituency in Uttar Pradesh, was shot dead from a close range by three masked gunmen in front of her Ashoka Road residence here in the heart of the capital's VIP area as she returned home for lunch after attending Lok Sabha session on July 25, 2001.

The court had on August 8 convicted Rana while it had acquitted 10 other co-accused in the case. Rana was held guilty of offences under sections 302 (murder), 307 (attempt to murder) and 34 (common intention) under the IPC in the case.

Continue FREE with Ads Pay Rs. 1 to Read Without Ads
READ MORE IN:
Phoolan Devi National
Next Story : No One Should Underestimate India's Potential: Abbott
Download the Outlook ​Magazines App. Six magazines, wherever you go! Play Store and App Store