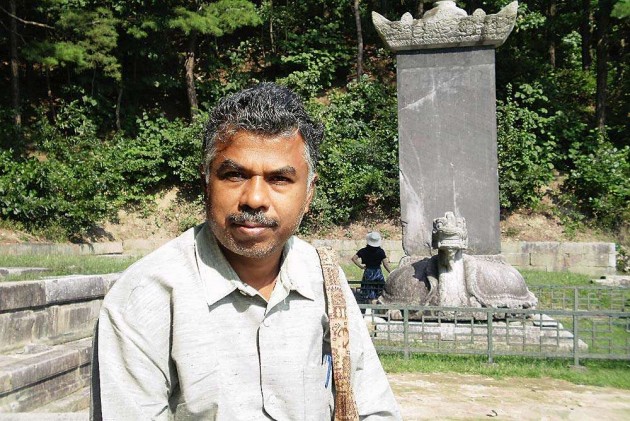 Perumal Murugan, whose book 'Madhorubagan' was withdrawn last month from the market after coming under attack from Hindutva and caste outfits, filed an affivadit in the Madras High Court today, praying for an order upholding a writer's fundamental right to free speech and expression.

"Whether others believe in the death of Perumal Murugan as a writer or not, I believe in it. A writer cannot function under threat or fear," he said in the affidavit filed before the first bench comprising Chief Justice Sanjay Kishan Kaul and Justice M M Sundresh.

Murugan apologised for not coming in person and prayed for an order to uphold a writer's fundamental right to free speech and expression.

On January 13, at a peace meeting organised by the Nammakkal district administration, the author had made an unconditional apology after his novel came under fire from some Hindutva outfits and undertook to withdraw unsold copies of the novel.

Describing the sequence of events that made him give the apology, Murugan said he was terribly mentally confused. The unbearable mental stress he and his wife underwent in weeks preceding the meet determined their version's tone.

"Our family had been living in virtual exile. My wife felt that if tendering an unconditional apology alone would help defuse the situation, I could take the decision and she also added that I should not suffer any inner breakdown," he said.

The affidavit was submitted before the bench hearing a batch of PILs filed in the aftermath of the controversy.

Murugan submitted, the function of a writer is to question social values and subject them to critical examination and said a writer must not mechanically accept anything.

After perusing the affidavit, the bench said "in view of the aggrieved party being before us as petitioner, we are not inclined to entertain the other writ petitions any more.

It then issued notice to all authorities concerned in the connected petitions filed on behalf of S Tamil Selvan of Tamil Nadu Progressive Writers and Artists Association and posted the matter after three weeks to enable the authorities and other respondents who objected to the novel to file counters.

The novel revolves around the travails of a childless couple and also deals with consensual sex between any man and childless woman to conceive during the annual temple car festival at Tiruchengode in Tamil Nadu.

It was alleged that the town of Tiruchengode, women devotees and the annual car festival of Shiva temple there were portrayed in a bad light in the book.

The author had, however, denied it and apologised if he had hurt any sections of people.