PDP Writes to Governor, Mehbooba Set to Be First Woman CM of J&K 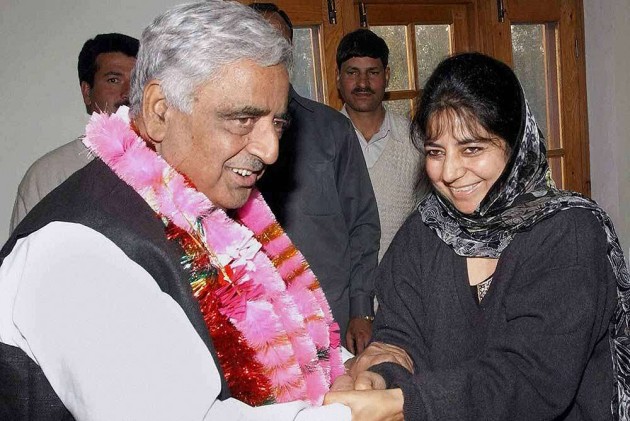 Print
A
A
A
increase text size
Outlook January 07, 2016 17:23 IST PDP Writes to Governor, Mehbooba Set to Be First Woman CM of J&K

Ruling PDP president Mehbooba Mufti is set to be the first woman Chief Minister of Jammu and Kashmir, succeeding her father Mufti Mohammad Sayeed who passed away today, with party MLAs unanimously electing her as their leader and writing to Governor N N Vohra in this regard.

A party delegation met the Governor at Raj Bhavan here and handed over the letter which says that the PDP legislators back the 56-year-old Mehbooba to take over as the 13th Chief Minister of the state, a senior PDP leader said.

He said the selection of Mehbooba, a Lok Sabha member, as the leader of 28-member PDP Legislature party was a unanimous decision.

The party leader, however, did not specify the date or time for her swearing-in.

"It will follow in due course of time as we are still in the process of performing last rites of our beloved leader," the PDP leader said.

Earlier, BJP, which is the coalition partner in the state government, left it to PDP to choose its nominee for the post of Chief Minister.

"As the BJP has left it to the PDP to select its Chief Ministerial nominee, decks seem to have been cleared for Mehbooba to become the first woman chief minister of the state," the PDP leader said.

"As far as PDP is concerned, we are unanimous that Mehbooba shall succeed Mufti Sahib," senior PDP leader and Lok Sabha member Muzaffar Hussain Baig told reporters soon after the demise of the Chief Minister in AIIMS in Delhi after a prolonged illness.

BJP, the junior coalition partner which has 25 members in the 87-member Assembly, made it clear it will go with the PDP's choice.

"It is for PDP to decide who will be their leader...Our alliance is with PDP," BJP vice president and its Jammu and Kashmir in-charge Avinash Rai Khanna told PTI when asked about his party's stand on Mehbooba succeeding her father.

Mehbooba has had her share of detractors in the saffron ranks for several reasons, including her passionate espousal of her party's 'self-rule' concept, which used to be dubbed "as soft separatism" by many in the BJP.

Sources said the sudden death of Sayeed leaves BJP with little choice but to go with his obvious successor.

"It was one thing for her to take over from her father when he was still around and totally another when he is gone. She is the obvious choice," they said, adding that both parties had invested a lot in bringing about an alliance that was seen as improbable.

Sayeed had crafted an unlikely alliance with BJP helping it share power for the first time in the Muslim majority state in March last year.

Mehbooba, who has assumed the image of a fiery leader, started her political career in 1996 by joining Congress along with her father.

The mother of two daughters won her first Assembly polls as Congress candidate from her home segment of Bijbehara.

The Muftis, along with some key associates, floated their own regional party, Peoples Democratic Party (PDP) in 1999.

In 2002 Assembly elections, PDP bagged 16 seats and Sayeed for the first time became Chief Minister with the support of Congress and some independent MLAs.

In 2004, Mehbooba contested and won her first Lok Sabha election from Anantnag.

In 2008, she contested Assembly polls and was elected from Wachi segment of Shopian in south Kashmir when PDP bagged 21 seats but lost power to NC-Congress coalition.

In May 2014, she was yet again won Lok Sabha polls from Anantnag.

Later in November-December Assembly elections, PDP got 28 seats and in March 2015 it formed its second government in Jammu and Kashmir---this time in an alliance with BJP.

Mehbooba has never lost an election from South Kashmir so far.