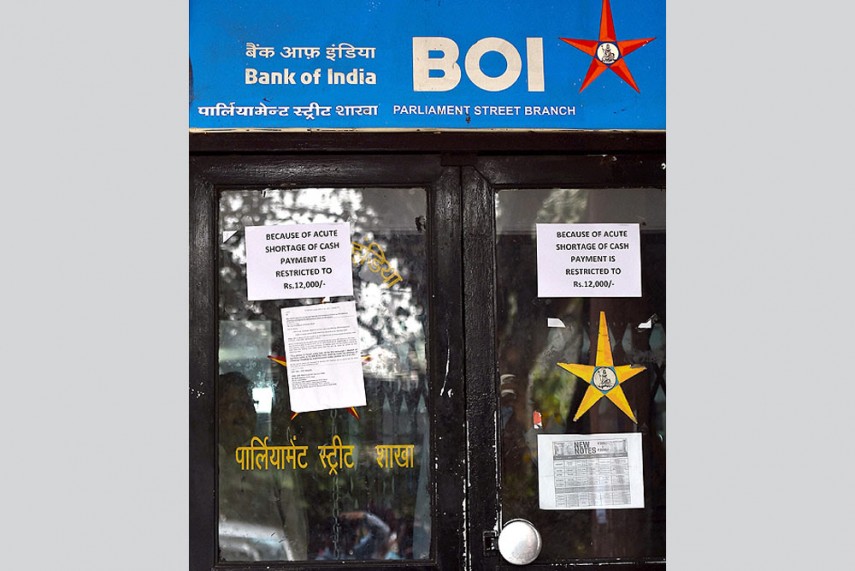 Faced with currency shortage and long queues, banks today resorted to rationing of cash at many branches countrywide but met with limited success to handle the huge pay-day rush, while ATMs continued to remain mostly dry, causing hardship to people seeking to withdraw money.

People in several parts of Tamil Nadu even braved heavy rains to get money for their household expenses, while long queues started building up in wee hours before ATMs and bank branches for withdrawal of start-of-the-month expenses on the first post-demonetisation pay day across several other states including Kerala, Gujarat, Maharashtra, Punjab and Haryana.

Having got much less than their regular requirement from the currency chests, many branches ran out of cash in post- lunch hours, even as people complained about being given money even below the permitted withdrawal limits at branches.

Long queue were visible at many places for withdrawal as a large number of ATMs are still not functional. Even the functional ATMs at many places could dispense only Rs 2,000 notes, leaving the customers without lower denomination notes.

Frustration and anger were also visible at many places in semi-urban and rural areas where banks and ATMs soon ran dry.

Metro cities too had similar scenes at many places with patience turning into anger against bank employees for their failure to provide currency other than Rs 2,000 notes.

Bankers said on their part that the situation is expected to continue for another 6-7 days because of withdrawal rush from salaried and pensioners.

Despite claims by various banks that adequate arrangement would be in place to handle the pay-day rush, branches were seen not only rationing the cash, many of them also refused to entertain the non-home branch customers.

A senior public sector bank official said the branches are compelled to resort to rationing because of cash shortage and it is difficult to meet the withdrawal limit of Rs 24,000 per person set by the Reserve Bank.

Some banks were seen disbursing only Rs 5,000 per person while those having better cash availability offered Rs 10,000 or Rs 12,000 per customer.

Making things worse, a large number of ATMs remained dry even 24 days after the government scrapped Rs 500 and Rs 1,000 notes earlier this month to crack down on black money.

Banks and state treasuries in Kerala witnessed heavy rush since morning, while the state's Finance Minister Thomas Issac said 42 treasuries in rural areas did not receive any cash at least till 11.30 AM.

Yesterday, a top government official had said special efforts were being made to pump in exta cash into banks to meet the heavy demand for currency notes on account of salary withdrawals but situation on the ground remained a far cry.

"As such, none of our branches are short of cash. We have ensured that enough cash is available at our branches in anticipation of higher demand after disbursement of salaries and pension in accordance with the customers demand," Canara Bank MD and CEO Rakesh Sharma told