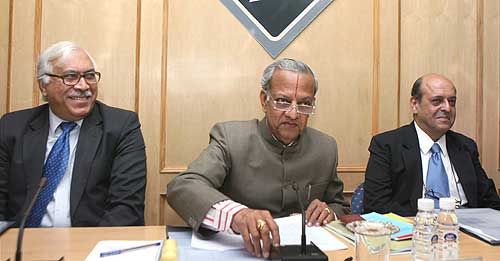 Expressing themselves against a prolonged exercise, political parties have demanded the shortest possible duration for the Lok Sabha polls and single-day poll in states.

At a day-long meeting, the full Election Commission heard the views of as many as 33 national and state parties on the forthcoming general elections likely sometime in April-May this year.

"Most of the parties suggested shortest possible duration of the whole election process... They suggested that in states where single day poll had been held in the past, the same procedure should be followed," an EC press note said.

The meeting came against the backdrop of one of the Election Commissioners S. Y. Quraishi hinting that the polls could be held between April eight and May 15.

The EC release said that most of the parties stressed the need to have Central Police Forces coverage in all places for ensuring free and fair poll, while a few parties were of the view that the paramilitary forces should be "need based" and not as a general rule.

"A common view among the parties who attended the meeting today was to hold the general elections towards the end of April," BJP leader Mukhtar Abbas Naqvi said.

Suggesting that the polls should not be stretched out too much, CPI-M leader Sitaram Yechury said it should not exceed "at the most three weeks". The party also opposed stoppage of ongoing developmental activities during the entire poll period.

Several parties demanded ban on publishing the results of opinion polls and exit polls till the completion of polls in all phases.

Some parties requested for relaxation on the issue of use of posters and banners, wall writing for election campaign, some others called for a total ban on hoardings and large sized banners and flags, it said.

There was a demand for counting of votes in such a manner that the booth-wise voting pattern was not known in order to prevent chances of post-election victimisation and intimidation of electors.

Emphasising observance of Model Code of Conduct in letter and spirit, the EC urged the parties to "strictly avoid" communal overtones in election campaign.

The Commission said there was need to curb corrupt practices and malpractices of bribing of voters with money, liquor and gifts in various forms, it said.

It urged the political parties to avail the facility of appointing Booth Level Agents to help improve the quality of electoral rolls.