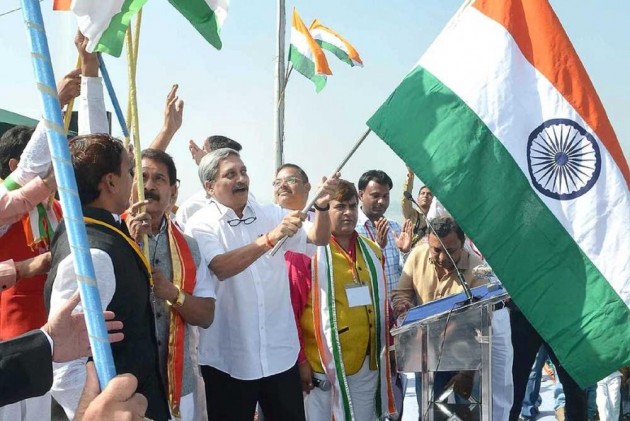 Print
A
A
A
increase text size
Outlook December 24, 2016 19:25 IST Parrikar Feels 500 Additional Votes Came His Way In First-Ever Election Due To Lotuses In Carambolim Lake

Defence Minister Manohar Parrikar has partially credited lotus from Goa's famous Carambolim lake for his first-ever victory from Panaji in the 1994 Assembly polls.

"There is importance to Carambolim lake. When I was contesting for the first time from Panaji...On the day of election, at around 4.30 in the morning, a group of workers came to Carambolim lake (which is generally filled with lotus which is also BJP's poll symbol).

"They jumped in the lake and returned with sacks full of lotus. Then when the polling was on, they gave lotus to voters before they went to exercise their franchise. I feel I got at least 500 additional votes because of this," he added.

The IIT graduate-turned-politician was elected MLA from Panaji in 1994 and since then he has won from the seat multiple times. In late 2014, the 61-year-old BJP leader was inducted into the Union Cabinet and given defence portfolio. He is currently a Rajya Sabha member from Uttar Pradesh.

Parrikar, a former Chief Minister, expressed confidence that BJP will win more than 26 seats (out of 40) when Goa Assembly polls are held nearly next year.

Admitting that the BJP-led State Government failed to keep its promise of providing sizeable employment, Parrikar blamed it on financial crisis arising out of the closure of mining industry.

"We fulfilled all promises (made in BJP manifesto) but could not do the same on employment generation front. But things are now picking up on this front too."

"The Goa Government has generated 24,000 jobs in different industries. The Centre, on the other hand, has given orders to Goa Shipyard Ltd which will create 10,000 jobs. In the next two to three years, a total of 50,000 jobs would be created," he added.