Parrikar Dodges Queries on His Possible Return to Goa Politics 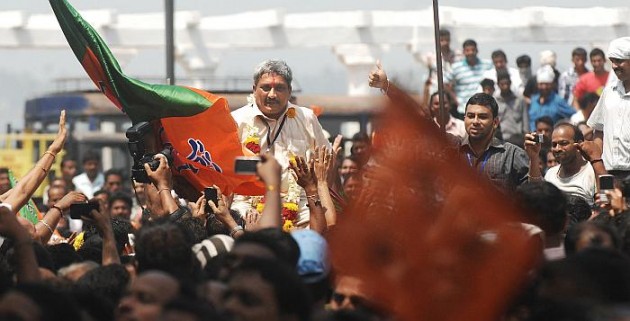 Print
A
A
A
increase text size
Outlook January 13, 2017 14:38 IST Parrikar Dodges Queries on His Possible Return to Goa Politics

Defence Minister Manohar Parrikar today parried questions on his possible return to Goa politics after the State Legislative Assembly polls, saying "let us cross the bridge when it comes".

"I can only say that let us cross the bridge when it comes. (Nitin) Gadkariji has said what we wanted to say," Parrikar told reporters here today when asked whether he will be back in the state as Chief Minister after Goa polls.

He had accompanied BJP candidate Siddharth Kuncolienkar to file his nomination for the upcoming polls where he is contesting from Panaji constituency.

The constituency was earlier represented by Parrikar till he was elevated to the Central cabinet after Lok Sabha polls.

Gadkari addressing a press conference here yesterday had said that the next chief minister would be decided in a democratic way by the elected representatives.

"This leader can either be from the elected representatives or we can even send (someone) from the Centre," he had told reporters here.

Parrikar, former Goa chief minister, and his Cabinet colleague Sripad Naik hail from the coastal state, but despite repeated queries, Gadkari had yesterday declined to reveal if he was hinting at one of them.

Parrikar today said Kuncolienkar will win in Panaji with a bigger margin than the last time.

He said development of the constituency would be the poll plank.

The BJP, which had won 21 of the 40 seats in the state in 2012, yesterday released the first list of candidates for the February 4 Assembly elections in the coastal state.