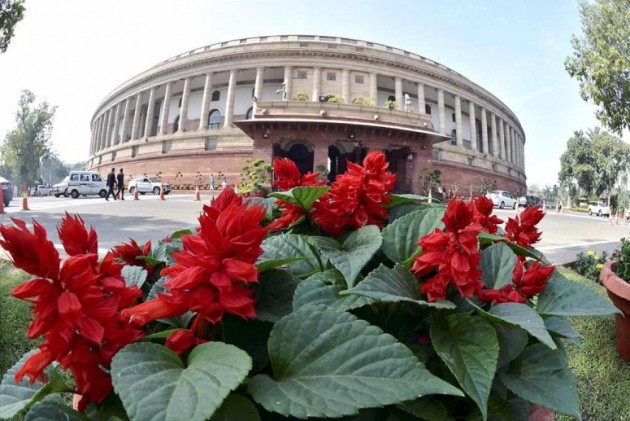 Proceedings in Parliament were washed out for the seventh straight day on Friday with the Opposition targeting Prime Minister Narendra Modi for his utterances against those opposing demonetisation and demanding an apology from him for "wrongly accusing the opposition of holding black money".

The government, however, rejected the demand.

Members of parties like Congress, Trinamool Congress, SP, BSP and Left created uproar in the Rajya Sabha and the Lok Sabha, taking strong objection to Modi's comments on Friday morning that "some people" are criticising demonetisation because "the government did not give any time to them to make any preparation (to convert black money into white)."

In the Rajya Sabha, as soon as the House met for the day and mourned the death of its former member Dipen Ghosh, BSP leader Mayawati was on her feet saying the Prime Minister had on Friday morning "wrongly accused opposition of holding black money" and demanded that he should apologise for his remarks.

Leader of Opposition Ghulam Nabi Azad questioned how Modi could make such allegations when it was made very clear by former Prime Minister Manmohan Singh and others during debate on demonetisation on Thursday that the opposition is against black money.

"How can Prime Minister level such an allegation? ... We are against black money. Prime Minister must apologise," he said as Congress and other opposition members trooped into the Well of the House, raising slogans like "Pradhan Mantri maafi mango (Prime Minister apologise)."

BJP members also came into the aisles and raised slogans supporting Modi to counter the Opposition onslaught against the government and the Prime Minister.

Amid the din, Deputy Chairman P J Kurien said a notice under rule 267 seeking suspension of business to take up discussion on ban on 500 and 1000 rupee notes has been received from Azad. "I am ready to admit that motion provided you are ready for discussion," he said.

Azad said his notice was conditional upon the Prime Minister coming to the House and listening to the entire debate and replying to it.

He said when Modi had come to Rajya Sabha on Thursday, "I had on behalf of the entire opposition welcomed him" and also asked whether he had come to participate in the demonetisation debate or in the Question Hour.

Kurien said it had been clarified by Leader of the House Arun Jaitley that the Prime Minister will come and intervene in the debate.

But Azad disagreed, saying "we were promised that Prime Minister will be in the House till the debate is over" but Modi did not return after the lunch hour yesterday. "

Mayawati said Modi has stated that if opposition was given 72 hours before demonetising high denomination currency, they would not have opposed him and instead praised him.

Painting the entire Opposition as those having black money is "a lie", she said, adding that the Prime Minister will have to apologise for his remarks.

Sharad Yadav (JD-U) said Modi has levelled a serious allegation and should apologise, while Ramgopal Yadav (SP) said there could not be anything more shameful than the Prime Minister alleging that the entire Opposition was a supporter of black money.

Derek O'Brien (TMC) said there was a good debate on Thursday where everyone had opposed blackmoney. And the now Prime Minister is saying "he is a saint and we are all devils". He also demanded an apology from Modi.

Kurien tried to reason with members for resuming the debate on demonetisation but Opposition members shouted slogans demanding an apology from Prime Minister. BJP members too countered them by raising slogans supporting Modi.

As the pandemonium continued, Kurien adjourned the proceedings till noon.

When the House reassembled and Chairman Hamid Ansari called the first question of the day, Congress members objected to taking up the Question Hour.

Leader of the Opposition Azad again referred to the remarks of the Prime Minister during the book release function earlier in the day.

Amid the din, Minister of State for Parliamentary Affairs Mukhtar Abbas Naqvi was heard saying that there was no question of apology from the Prime Minister, instead the Opposition should tender an apology.

At this point, Congress members trooped into the Well raising slogans as several BJP members were also seen standing in the aisles and shouting back.

As the uproar continued, Chair adourned the House till 1430 hours. Similar unruly scenes erupted again when the House reassembled, forcing Kurien to call it a day.

The scene in the Lok Sabha was no different, with the Opposition parties vociferously protesting against the Prime Minister's comments and demanding an apology from him.

Amid the din, the House could take up only two questions during the Question Hour, before it was adjourned till noon and then for the day.

Demanding his presence in the House, Opposition members raised slogans asking Modi to make his statements inside the House and not to attack them outside.

As soon as the House met, Speaker Sumitra Mahajan said that the Constitution Day would be observed on Saturday and referred to the 8th anniversary of Mumbai terror attacks.

Leader of Congress in the House Mallikarjun Kharge referred to Modi's remarks at a function earlier in the day in which he had hit out at the Opposition over demonetisation.

Modi had said opposition parties were attacking him as they did not get time to prepare in advance.

"The issue now is not our demand for an adjournment motion but the remarks of the Prime Minister... He said the Opposition supports black money," Kharge said as members from various opposition parties rushed to the Well demanding that the PM make a statement in the Lok Sabha.

The Opposition members were heard shouting "Pradhan Mantri sadan mein aao...Himmat hai toh sadan mein bolo," (PM, come to the House. If you have the courage, speak in the House).

Expressing anguish that the Opposition was not ready to help run the House, the Speaker adjourned the proceedings for over 35 minutes till noon.

There was no let up in the Opposition's protests when the House reassembled, even though the Speaker persisted with the Zero Hour for over 35 minutes in which members raised certain issues which could not be heard in the din.

TMC leader Sudip Bandhopadhyay was allowed to speak when the members of his party withdrew from the Well for a while, but Mahajan did not allow Kharge to speak as Congress members continued to shout slogans and remained present in the Well.

Modi's comments have hurt the Opposition's feelings, the TMC leader said, demanding that he withdraw them and apologise, drawing protests from treasury benches.

Rejecting Congress members' demand that Kharge be allowed to speak, she said "you will remain in the Well, shout slogans, tear papers and would like to speak as well. I cannot allow it."

She adjourned the House for the day as Opposition members including those from the Congress, TMC, Left and RJD continued with their protest and slogan-shouting.